Dallas mother of quintuplets adjusts to life at home

A Dallas mother who gave birth to quintuplets now has her five babies at home.

DALLAS - A Dallas mother who gave birth to quintuplets now has her five babies at home.

They were born more than two months premature. The smallest weighed only three pounds at birth. But now at 12 weeks, they have doubled in size.

The quintuplets are the first born at Parkland in more than 7 years.

Their parents for years thought they couldn't have children, so they certainly were not ever expecting of having five at once.

The Raymundo quintuplets wear onesies with their names on display, but mom Brenda Raymundo doesn't have any trouble telling her five babies apart: Alejandro, Humberto, Antonio, Leilany, Amara and Ibarra. 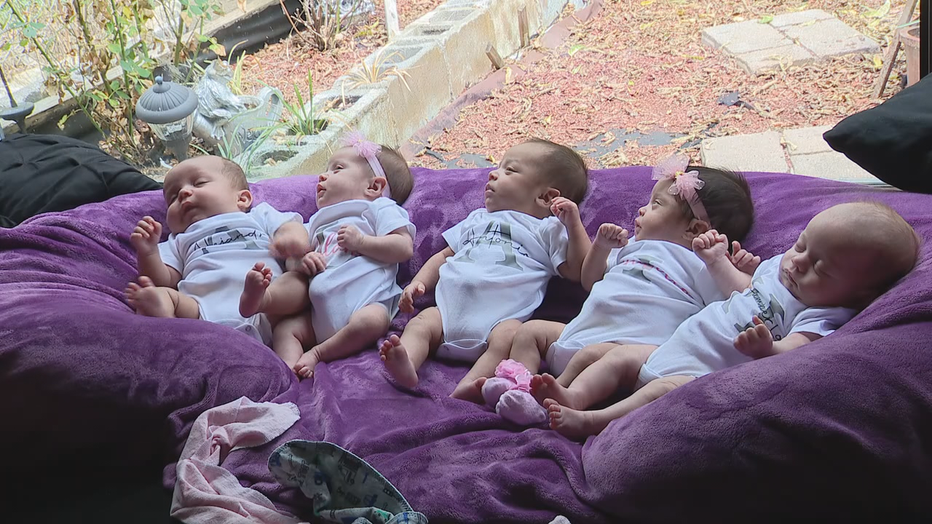 Brenda says she and her husband struggled to get pregnant for years.

"I wanted to have kids for three years, but I could not," she said. "Living in Mexico, we went to a specialist."

The doctor prescribed a fertility drug and told Brenda the risk of having more than twins was extremely rare.  Then while living in Dallas, she had her first doctor's appointment at six weeks.

"I was alone. My husband wasn’t with me due to COVID," she said.

When the doctor told Brenda she was pregnant with five, she was shocked.

"I started crying. I was worried how they would turn out and if there would be really premature," she said.

"I said, ‘You are never going to make it,’" recalled Maria Acosta, Brenda’s mom. "But then God said, ‘You are the grandma. She is your daughter, and I chose you. You can do it.’ Then, I felt strength."

Brenda’s brother and her mom are helping with the around-the-clock feedings and diaper changes. And as any parent of one baby knows, there are a lot of diapers to change.

"It is expensive for one, but five," she said. "My husband is not working right now due to an accident."

The babies go through about 50 diapers a day.

But when Brenda is exhausted, a look from the five faces is enough.

"I feel blessed," she said. "Look at them. They are all big and healthy."