A Dallas man accused in a murder, carjacking and assault was arrested with the help of security guards. They say he wasn't wearing pants when they took him down with pepper spray and a stun gun on I-35E at Royal Lane.

DALLAS - Dallas police say a man murdered someone in his apartment, crashed into a car on I-35 E, carjacked another driver at gunpoint, crashed that vehicle and climbed into a big rig before nearby security guards took him down. Cell phone video caught the end of the one-man crimewave.

Police say the man who was arrested in his underwear and caught on video is Ryan Glover, 27. It took pepper spray and tasers before a group of security guards could cuff him.

In an hour-time span, someone heard multiple gunshots when police say Glover killed a man, carjacked a person and assaulted another person before being taken into custody.

Glover was arrested just before 2 a.m. Sunday off I-35 E and Royal Lane.

Prior to the incident on the highway, investigators say Glover crashed his car into another car. There, a driver told police that Glover "walked in front of his F-150, produced a firearm from his boxer briefs...and pointed it at him," an affidavit states.

A murder suspect was captured with the help of some security guards at a Dallas business. This video shows the end of a one-man crimewave that also involved a carjacking, accidents and assaults.

Investigators say Glover assaulted the man and took off with his truck before crashing the pickup and approaching a semi-truck seen in the cell phone video.

Investigators say Glover "climbed into the semi-truck and sat in the passenger seat saying, ‘Help me.’"

Glover started hitting the driver, and that’s when security guards from a nearby business got involved and ordered him out of the big rig."

What Beneke, the carjacking and assault victims and security guards did not know at the time was that Glover is believed to have murdered a man just before all of that went down. 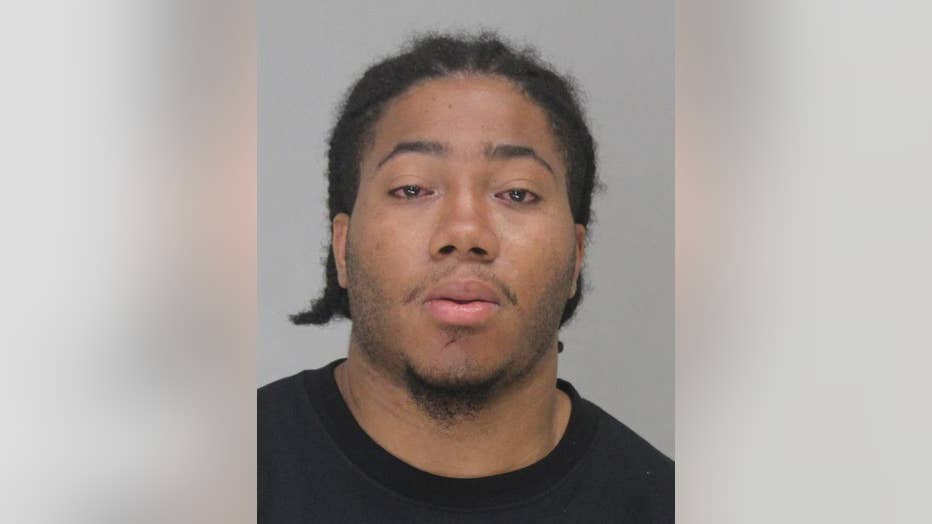 Court records say a neighbor heard three gunshots around 1:14 a.m. Sunday but did not call 911. Police were not called until someone found Hudson in the apartment at 5:29 a.m.

When DPD detectives questioned Glover about Hudson's body in his apartment, he told them he came home from work for his lunch break Saturday night from 8 p.m. to 8:45 p.m. Glover claimed Hudson was "in his apartment, and everything was fine."

Glover told police after he got off work Sunday morning and was driving to his girlfriend's house, "his head began to spin, and he does not remember what happened afterwards."

Glover has no criminal history.

The arrest affidavit says Hudson had been staying at Glover's apartment for a few days.

Court documents say two guns and a bag of marijuana were found inside the apartment.

Beneke says he was shocked when we told him during our interview that he had unknowingly been recording the takedown of a murder suspect.

"Wow. I mean, I had no idea. I can only imagine what the people suffering went through and are going through," he said.

The affidavit says Glover made some calls just before the time when the neighbor heard gunshots at the apartment.

One person police talked to about getting a call said Glover sounded like he was under the influence of something.

Glover is still in jail facing murder and other charges.