The Dallas Police Department said it is investigating a so-called challenge coin made by a white officer that the head of the Dallas Black Police Association called "racist."

DALLAS - The Dallas Police Department said it is investigating a so-called challenge coin made by a white officer that the head of the Dallas Black Police Association called "racist."

The chief of police called it wrong and said the officer is suspended and under investigation by internal affairs.

Challenge coins are typically commemorative coins used by many organizations, but especially law enforcement, to boost morale and camaraderie. Officers will exchange them amongst one another.

It depicts a drug dealing character named "dough boy," who is holding an assault rifle, cash, and wearing gold teeth. It also has a car with giant gold rims facing off with a Dallas PD vehicle. 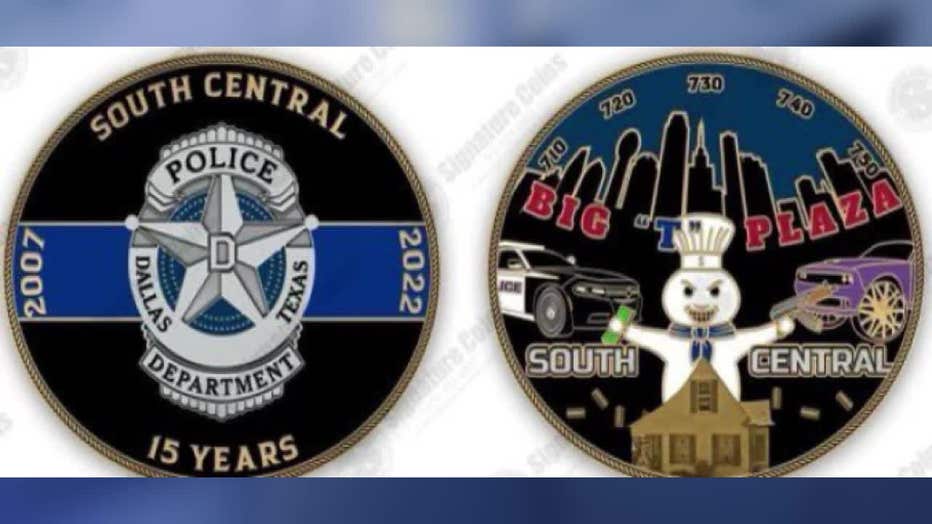 "Listen, I have stood before you many, many times to say that when we’re right, we’re right, regardless of the outside noise, but when we are wrong, we will hold ourselves accountable and we are wrong," Chief Garcia said. "This is not what we stand for."

The rendering was put together by a white officer in the South Central Division.

It also has the words "Big T Plaza," which is a shopping center off I-35 and Ann Arbor in Oak Cliff that primarily serves black customers.

"It’s a very big deal to the African American community because it’s the one place that provides a space for black and brown entrepreneurships to actually do business and make a profit," said Mar Butler, a community leader with The Village Project.

Butler believes the rendering highlights undeserved stigmas about the community as a whole.

"We have good people that are here," he said.

The rendering was posted to social media to gauge interest from other officers.

"So when we have these issues with this type of mentality, and we have a group of people who are supposed to be policed by somebody that’s fair, unbiased, now you can see where the issues come in," Black Police Association of Dallas President Terrance Hopkins said.

Hopkins believes the officer’s rendering reveals a bias against the community he’s policing.

The chief said, to his knowledge, the coins were never made.

The Dallas Police Association told FOX 4 the rendering was posted to its members page on social media and was later taken down. It added the coin is in "very poor taste."