Saturday marked Wreaths Across America Day, where volunteers laid wreaths at the tombstones of the men and women who fought for our country.

DALLAS - Saturday marked Wreaths Across America Day, where volunteers laid wreaths at the tombstones of the men and women who fought for our country.

That work was done at Dallas-Fort Worth National Cemetery, where more than 50,000 wreaths were laid in honor of those who lost their lives.

"Think of them. Think of their families," an organizer told volunteers at Saturday’s event said.

There are thousands of names etched in markers at Dallas-Fort Worth National Cemetery. Each one has a story.

He was a technical sergeant in the U.S. Air Force for 16 years. He died a few months ago.

For some families, their loved one’s passing is fresh and visibly painful, but in a showing of gratitude, everyone buried at Dallas-Fort Worth National Cemetery was recognized with a wreath from Wreaths Across America on Saturday. 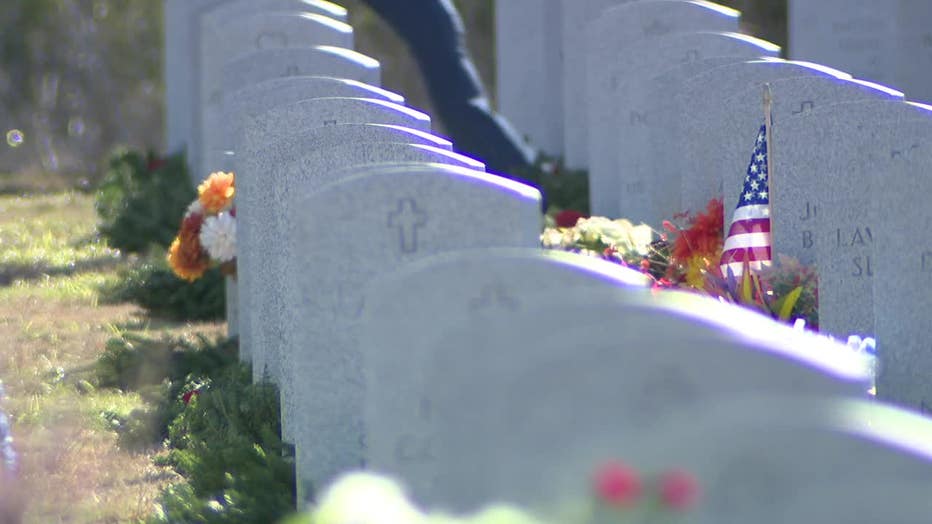 RELATED: Wreaths Across America: 50,000 wreaths to be placed on graves at Dallas-Fort Worth National Cemetery

Volunteers were asked to read the person’s name out loud while placing the wreath on their grave.

"Lance Corporal Lewis Qualls. He’s a brave young man that I was afforded the opportunity to serve with," Wreaths Across America volunteer Michael Wittrock said. "He was killed in action in November of 2004. In the Battle of Fallujah."

There are more than 50,000 markers at Dallas-Fort Worth National Cemetery. All of them received a wreath Saturday, according to organizers. It’s part of a nationwide effort.

"So this is happening [Saturday] at Arlington Cemetery, for example, other national cemeteries here in Texas, and all across the United States," Wittrock explained. "Remembering those who served, and those who gave the ultimate sacrifice, how to honor those that are served and that are still serving, and to teach our children, our grandchildren, and the next generation the price for freedom and the sacrifices that have been made by those men and women in the armed forces."

"You die twice. Once when you take your last breath and once when your name is said for the very last time," an organizer said. "And that’s never going to happen here because every year we are going to come back and we are going to say the name of every person at this cemetery."

Boykin said her late husband was 61 years old when he passed away in his sleep. Now, while feeling support from people at the cemetery, she’s happy to share his story.

"It just brings me joy," she said. "I’m proud of him and I’m proud of all of the people who are here now, here recognizing such great individuals who have served our country."