DALLAS - A teen's death is the first in Dallas County to be associated with e-cigarettes and vaping. 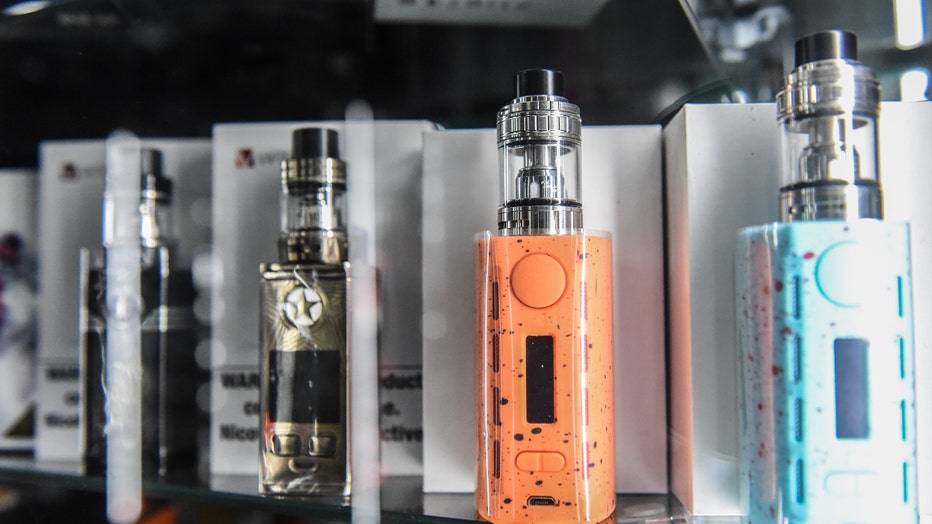 NEW YORK, NY - DECEMBER 19: Vaping and e-cigarette products are displayed in a store on December 19, 2019 in New York City. Congress raised the legal age to smoke or vape to 21. According to the FDA, in 2018, more than 3.6 million middle and high sch

Dallas County Health and Human Services (DCHHS) reports the patient had a chronic underlying medical condition and was a resident of Dallas County. For patient confidentiality purposes, Dallas County does not provide additional identifying information on the patient.

"Reporting a death in a teen due to EVALI is so tragic", said DCHHS Director Dr. Philip Huang. "We are seeing that severe lung damage, and even death, can occur with just short term use of these products."

As of Dec. 30, DCHHS has received reports of 53 confirmed or probable cases in patients hospitalized in Dallas County facilities, including one teen who reportedly just started vaping a month ago.

A North Texas 17-year-old spent 18 days in a Fort Worth hospital and nearly died of lung failure in August. At the time, the hospital's medical director of emergency services said he saw about a child a week for some sort of problem related to vaping.

A North Texas woman was the first person to die of vaping-related lung disease in the state. The Texas Department of State Health Services says the patient was an elderly woman who died in early October.

E-cigarettes produce an aerosol by heating liquids typically containing nicotine, flavorings, or other chemicals that are inhaled, a practice referred to as "vaping". Marijuana and other drugs can also be delivered by e-cigarettes.

Nationally, a total of 2,561 cases of hospitalized e-cigarette, or vaping, product use-associated lung injury or deaths have been reported including 55 deaths in 27 states and the District of Columbia. Texas has reported 228 confirmed cases and two deaths associated with EVALI.

In September, Baylor Scott & White reported a vaping-related illness in the Austin area. By the end of October, there were twelve reported cases of EVALI in Travis County.

Also in September, Houston confirmed three teens were hospitalized due to vaping.

The CDC has launched a multistate investigation into the EVALI outbreak and a recent measure has increased the national legal age to buy tobacco products, e-cigarettes and vaping devices from 18 to 21.

Anyone concerned about their health after using an e-cigarette or vaping product is to contact their healthcare provider or local poison control center.