Texas Department of Transportation crews have been out clearing the snow but there's only so much they can do. If you can stay home, please do so.

DALLAS - It was a snowy Sunday and that is causing problems on the roads.

The Texas Department of Transportation said crews are busy making sure North Texas roads are as drivable as possible.

TxDOT now has about 30 snowplows and other snow clearing equipment. But that’s for an enormous service area. 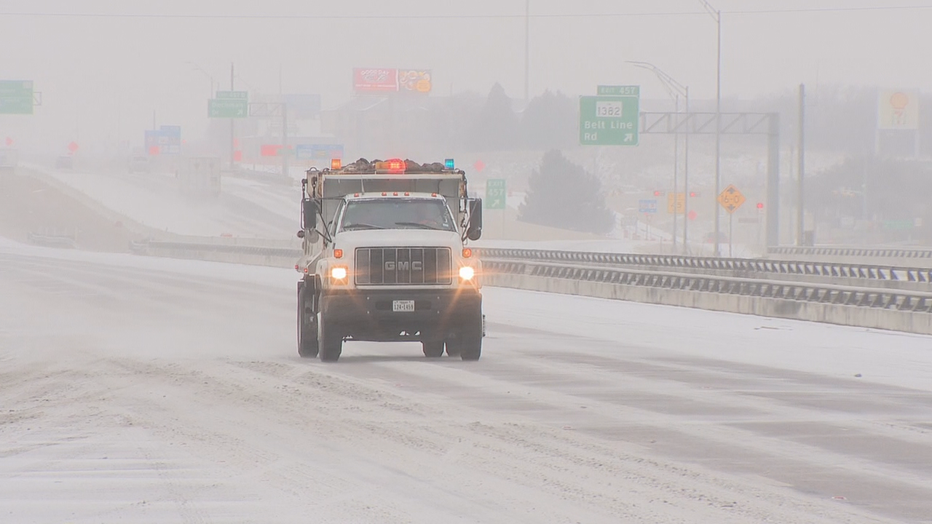 "We have seen some unprecedented events and our drivers are out there working around the clock to keep the roadways as passable as possible. But we can only do so much," said Patrick Clarke, a spokesman for TxDOT’s Dallas district. "So we want people this morning if you don’t have to be out there I can’t stress it enough. Please stay home."

Clarke said enough though many roads and overpasses were pre-treated, the temperatures are now below the point at which pre-treating works.

"Let me tell you, we have been pre-treating all week long but again at a certain point it no longer is as effective as it should be and so as much as we’re treating the roads and we’re out there with our snowplows, we can only do so much."

Those who absolutely must be out on the roads should drive to the conditions and not the speed limit, he said.

It was a snowy Sunday and that is causing problems Monday morning on the roads. FOX 4's Shannon Murray gives an update.

"The conditions, you gotta take it easy. Gotta take it real easy," said Neco Williams, who was out getting gas early Monday morning.

"Kind of thought it would be worse but obviously with everyone in the news giving so much warning, a lot less people have been out so it’s not too bad," said Andrew Strong, who was also on the roads Monday morning.

Of course, it’s the snow on the side streets that usually don’t get plowed that will cause the most problems for drivers.

FOX 4’s Dan Godwin talked to a man who was plowing snow from the parking lot of a CVS pharmacy. He said his company was called in all the way from Minnesota to help out in the weather emergency.

It's the snow on the side streets that usually don't get plowed that will cause problems for drivers today. FOX 4's Dan Godwin reports.

He said he and his fellow plow truck drivers from way up north would be clearing snow from dozens of businesses around North Texas.

"I believe last I heard it was approaching the 300 mark as far as the number of properties and we’re doing this because we got a call that someone needed help and we’re here to help," he said. "This is definitely a Minnesota thing. Yeah. I was not expecting to see this much snow and ice down here. But I guess we can see what we can do about it and get it done."

He said even with his experience and his specially-equipped truck, driving around in the current conditions has been a challenge.

Thankfully it’s President’s Day and a holiday for most schools and some businesses.

"So that does give us some sort of relief because we expect a lot of people will be home on this holiday," Clarke said.

The winter weather has also forced nearly 1,000 flights to be cancelled at area airports Sunday.

RELATED: Hundreds of flights cancelled at Dallas airports due to the winter weather