Dallas County is awaiting a decision on its mask mandate.

DALLAS - Dallas County is awaiting a decision on its mask mandate.

A judge has been listening to hours of arguments from Dallas County Judge Clay Jenkins and the attorney general’s office.

Attorneys for Jenkins are hoping to get a temporary injunction to allow for the county’s mask requirement to continue.

Judge Tonya Parker heard from three doctors, Jenkins and from a concerned parent of an immunocompromised student who is representing hundreds of parents who argued for having a mask mandate. 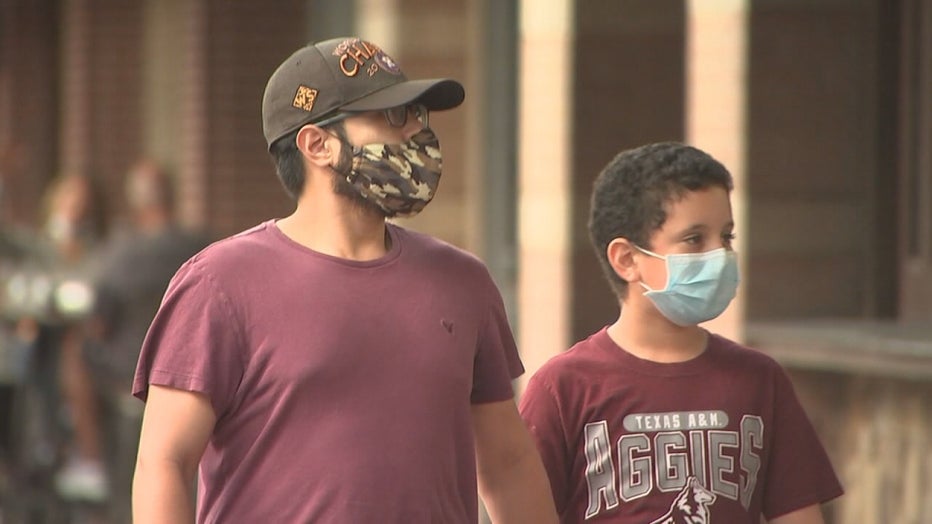 The judge did not allow for the hearing to be recorded, but witnesses testified to the rising cases and hospitalizations in Dallas County. They said it could stress the healthcare system, and their scientific belief is that masks would help save lives.

Appellate law attorney David Coale is not involved in the case but has been watching closely.

"The attorney general and the governor have always said this is a legal question, not really a public health question. It's gone beyond that," he said.

The evidence submitted by Jenkins' attorneys included more than 800 pages of letters and emails from parents urging a local mask mandate.

A district court judge in Dallas County held a hearing to decide if a temporary injunction should be issued to allow the mask requirement to continue. The media was not allowed to record the hearing.

The court heard from one mother of an immunocompromised student on the consequences COVID-19 could have for her child and the benefits of her daughter being in school.

"If anything, the public health case for a massive mandate has gotten stronger," Coale said. "The question here is once the judge has made her findings of fact, tied them into her view of the law, what's going to happen on appeal with the purely legal issue."

Lawyers with the attorney general’s office argued the witness testimony and evidence on COVID-19 and masks are irrelevant in this argument, which comes down to a question of if the county judge or the governor has legal authority.

"The point he was trying to make is the governor isn't just a public health official," Coale said. "The governor has to balance public health with other important state policies here, what he sees as a strong interest in individual autonomy, freedom for people to make their own decisions about medical and health care matters."

Attorneys for Jenkins closed by arguing the governor’s ban on mask mandates is legally and morally wrong and not coping with disaster but instead "waving the white flag."

"The county judge obviously has a different opinion. He believes that he has power under the Disaster Act. And this evidence he is presenting shows that he's using that power justly and fairly," Coale said. "And it sort of outweighs the governor's interest in other things, such as personal autonomy, how you balance all that."

Once the court’s decision comes down, it will likely then go to an appeal before heading to the Texas Supreme Court.

"Assuming that she grants a temporary injunction, what will undoubtedly happen is that Attorney General Paxton will file a notice of appeal that will immediately supersede the injunction, basically bring it to a halt," explained Doug Alexander, who is representing Jenkins. "We know that as soon as that order gets signed, that notice of appeal will be filed. And at that point, then we're going to be filing our motion."

Meantime, the attorney general’s office says they have six temporary injunction hearings on these issues over the next four days and expects those to go on appeal.