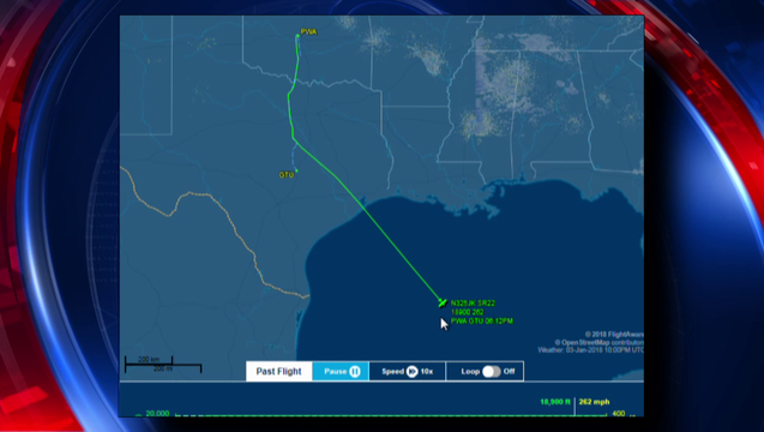 A doctor volunteering for a dog rescue operation who failed to land his small plane at an airport in Central Texas as planned and was later tracked by fighter jets flying over the Gulf of Mexico appeared unresponsive and may have been suffering from a lack of oxygen, officials said Thursday.

The Coast Guard identified the pilot of the Cirrus SR22T as Dr. Bill Kinsinger, who took off from Wiley Post Airport in Oklahoma City Wednesday afternoon after filing a flight plan to land in Georgetown, Texas, about 25 miles (40 kilometers) north of Austin.

Coast Guard spokeswoman Lexie Preston in New Orleans said Thursday that Coast Guard aircraft are searching for the plane in a broad area off the Yucatan Peninsula in Mexico.

After Kinsinger stopped responding to air traffic controllers, the North American Aerospace Defense Command, or NORAD, launched two F-16 fighters from a base in Houston and made contact with the plane, NORAD spokesman Michael Kucharek said. The fighters flew in front of the five-seater plane, dropped flares and performed other military maneuvers in an effort to gain the pilot's attention, but Kinsinger, who was the only person on board, appeared to be unresponsive, he said.

The F-16s became low on fuel and were replaced by two F-15 fighters from New Orleans. The F-15s stayed with the plane for a time but later returned to base because of darkness and their proximity to Mexican air space. Kucharek said NORAD coordinated with the Coast Guard to take over monitoring the plane. The Guard, which was relying on the FlightAware website, lost track of the plane when it stopped transmitting a signal, Coast Guard Petty Officer Travis McGee said.

"We didn't deem the plane to be a threat and that's normally what we're looking for," Kucharek said.

The Eighth Coast Guard District, referencing a NORAD report, said Kinsinger appeared to be suffering from hypoxia, in which the brain is deprived of adequate oxygen. The condition can cause confusion, nausea, breathlessness and hallucinations. If left untreated, it can be fatal.

According to FAA regulations , a civil aircraft pilot flying solo must use supplemental oxygen if flying for longer than 30 minutes above 12,500 feet (3,800 meters), and for an entire flight if flying above 14,000 feet (4,300 meters).

The executive director of the Oklahoma Medical Board, Lyle Kelsey, said Kinsinger is an anesthesiologist who he serves on the board and lives in Edmond, Oklahoma. FAA records show the plane belongs to Abide Aviation, which is registered to Kinsinger's home address.

Kinsinger was flying a rescue mission for the nonprofit Pilots N Paws when his plane went missing, according to flight coordinator Monica Marshall, who said she was tracking his progress when radar indicated he had veered hundreds of miles off course. Pilots N Paws has a fleet of volunteer pilots with private planes who transport dogs in need of rescue, shelter or a new home.

"He was the type of guy that went above and beyond," Marshall said. "If someone bailed on an assignment then he would just stretch and do it for you."

A message left for a brother of Kinsinger was not immediately returned.

This is not the first recorded instance of a pilot losing consciousness due to a lack of oxygen.

The National Transportation Safety Board determined that a pilot suffered from hypoxia while flying golfer Payne Stewart and three others on a private plane from Florida to Texas in 1999. The plane veered off course and later crashed in South Dakota, killing them all.