As of now, the NWS confirms an EF-2 tornado touched down in Blum in Hill County, about 50 miles south of Fort Worth. Wind speeds measured at 130 miles per hour. It was on the ground for 11 minutes and moved more than three miles on the ground.

An EF-0 tornado was confirmed in far southeastern Johnson County just east of Grandview. No significant damage was reported with this tornado.

An EF-0 tornado also happened in the eastern part of Granbury in Hood County just after 6 p.m. Monday, producing some minor damage to some trees and a carport.

The hardest-hit area seemed to be in Ellis County near Waxahachie where the NWS confirms an EF-2 tornado there. There are at least two locations with damage there after the tornado was on the ground for nearly 15 minutes. Max sustained winds there were up to 120 miles per hour.

"Almost 40 minutes in advance is amazing to have a warning out," said meteorologist Jennifer Dunn.

About 20 to 50 structures were damaged and eight people were injured in Ellis County, including three truck drivers whose 18-wheelers were blown off Interstate 35E near Forreston Road. 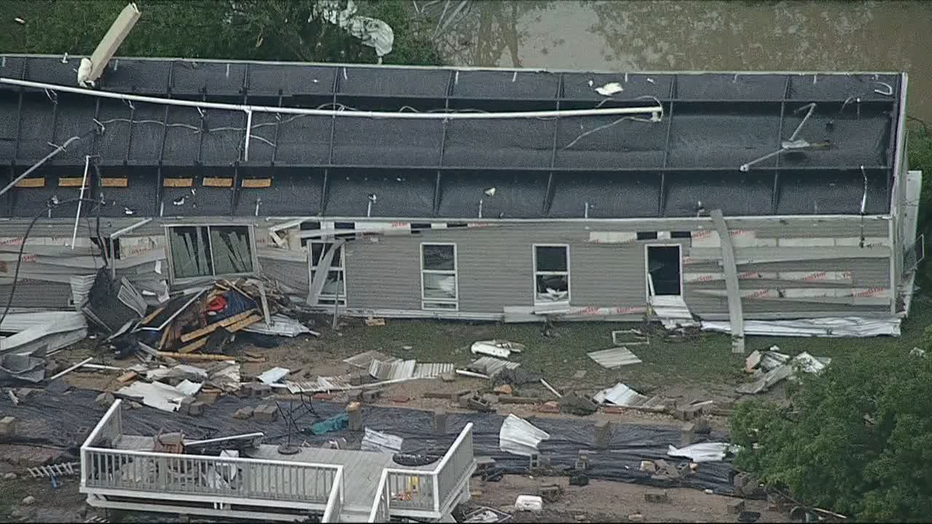 One of the truck drivers is in serious condition, according to Ellis County Sheriff Brad Norman. He says good Samaritans helped others before first responders arrived.

"Several people came to their aide. At least one was a retired firefighter," he said. "One had a saw and tried to help saw some people out."

"As I closed the door, the wind was coming through," he recalled. "I was hollering for my son. He was upstairs. My wife was in the bedroom."

The damage to their home is extensive.

"You can see there all the debris and limbs that came in the house. It happened so fast," he said.

A look outside and you can see what's left of Jaramillo’s son's bedroom.

"My son was upstairs. His room was totaled. His whole room is gone," he said.

Several of Jaramillo’s neighbor's homes were also damaged by the relentless winds. 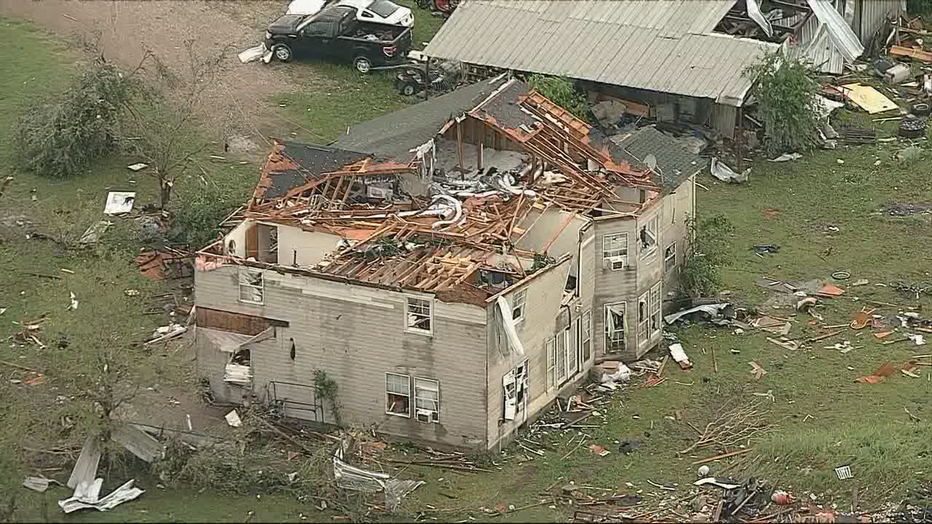 Ellis County Judge Todd Little says three of the people injured were drivers of 18-wheelers toppled over on I-35E.

"They literally cut one guy out from the bottom of the 18 wheeler," he said. "It was not a good situation."

The Texas Department of Public Safety said the three drivers are all expected to recover but one has serious injuries.

Video showed the trucks on their sides, causing a major traffic backup overnight.

Crews had to shut down Interstate 35E in Ellis County Monday night after three 18-wheelers blew off the road.

It took hours the clear the road because the trucks were carrying grocery items like Tic Tac, Nutella, bell peppers and cucumbers. All of it had to be removed from the road.

"You could feel it in the house was moving and you could hear this vibration like somebody turn the base up," Nichols said. "We’re too old for this. Oh my God. What are we going to do with all this mess?"

Ellis County Sheriff Brad Norman says most of the damage is off Highway 77, south of Waxahachie.

"A search and rescue mission started Monday night getting people extracted from mobile homes that were upside down.

Storm victims are counting their blessings.

"You can’t sit and dwell on it. We walked out, and we’re alive. The cats were alive," Nichols said.

The American Red Cross is helping about a dozen or so families with temporary housing. They'll stay in a hotel for the next few days. Texas Baptist Men are also handing out bottled water.

No deaths have been reported.