Carry the Load draws hundreds to Dallas for Memorial Day

The idea behind Carry the Load is to remind everyone about the true meaning of Memorial Day.

DALLAS - A lot of people are honoring veterans and those who gave their lives for our country at the annual Carry the Load event in Dallas on Monday.

The seven-mile course was set up at Reverchon Park. Some people have been out on the trail since late Sunday afternoon. Some went shorter distances.

The idea behind Carry the Load is to remind everyone about the true meaning of Memorial Day.

All of the participants are walking in memory of a fallen service member.

U.S. Marine Corps Veteran Aaron White walked in memory of Dan Wolf, a Navy officer who lost his battle to cancer in 2020.

"This event was very special and it was near and dear to his heart," White said. "And so I'm out here walking for him."

White says he was at the first Carry the Load event when there was only 250 people.

"It's unbelievable to see," he said. "Carry the Load started as a way to restore the true meaning of Memorial Day. And so to see now America catching on to what Memorial Day means to veterans is a pretty incredible sight."

A lot of people are honoring veterans and those who gave their lives for our country at the annual Carry the Load event in Dallas. The idea behind the event is to remind everyone about the true meaning of Memorial Day.

Carry the Load is now in its tenth year.  Over the last decade, it has raised more than $28 million to support Gold Star families, veterans, military and first responders.

Last year, the in-person event was cancelled due to the pandemic.

Carry The Load co-founder Stephen Holley says being together this year with other families of fallen service members helps to fill an empty void.

"It's phenomenal to get everybody back out here in person," he said. "For us to take one day out of the year to remember those folks to honor their service and sacrifice, that's the least that we can do."

Over in DeSoto, people huddled together under umbrellas to honor fallen service members at the city's military monument.

DeSoto Councilmember Crystal Chism is a veteran who lost several friends in action.

"They did not come home with me," she said. "It hits you differently on days like this, and I carry them in my hearts." 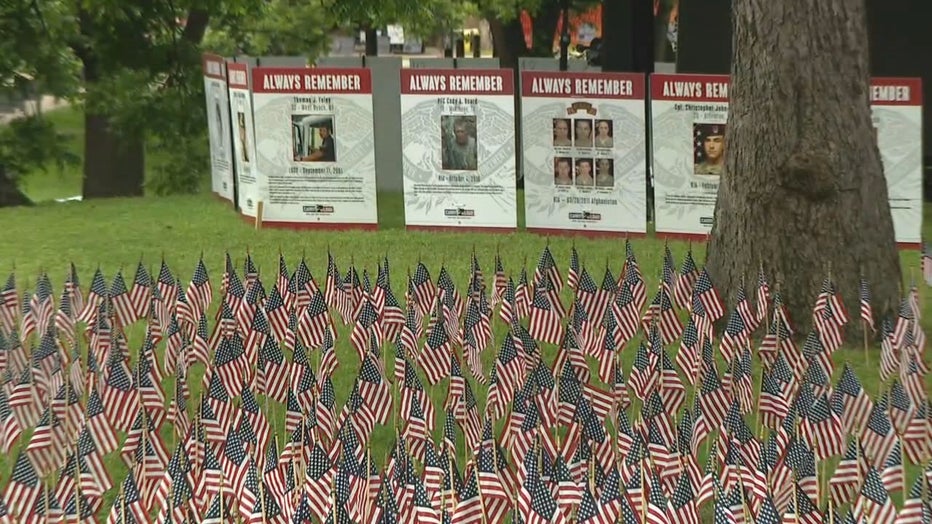