CARROLLTON, Texas - A shooter or shooters targeted a Carrollton family’s apartment, spraying it with dozens of bullets. Amazingly, none one inside was hurt.

Arvin Rangani said his family was fast asleep around 1:30 a.m. Wednesday when the gunfire erupted at the Peters Colony Apartments.

His 33-year-old cousin was in bed when bullets barely missed the top of his head by inches.

"If he’s standing up, if he’s in any other position, it’s all over. He was in the one spot where he’s not getting hit," Rangani said.

In the living room, Rangani’s 67-year-old uncle was lying on the couch. That couch is leaned against the outside wall where on the other side, shots were being fired.

"Instead of me talking to you about this, I could be at a funeral," he said. 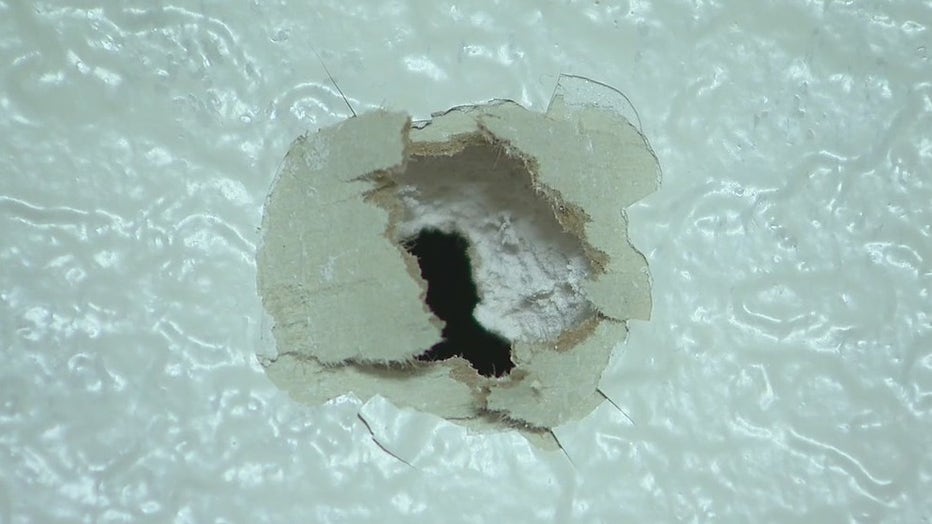 "It starts over there and goes into the ceiling because of the angle in which the parking lot is and where they were shooting from. And then they kind of go down here where the window is at," Rangani said. "It goes into the kitchen just the same all the way up here. You can see it kind of going to the neighbor’s up top, so, I mean, Indiscriminate fire. They were just blasting and trying to empty it out."

Carrollton police said they are investigating the shooting and do have some leads, but they aren’t releasing those details.

The department hasn’t said how many people they are looking for or what type of weapon was used.

Detectives also won’t confirm if it was a case of mistaken identity but said they have no evidence the family was targeted.

"They definitely were targeting this place but it’s the wrong spot," Rangani said.

He and his loved ones are confused and want as to why their apartment was singled out. They also want those responsible off the street so they can get some sleep.

They’re considering moving out after 25 years in the same apartment because of the trauma.

"But yeah okay they are alive, and people move on with their lives. But it’s not okay. You know, we’re shook. Our whole family is," Rangani said.