An Oak Cliff neighborhood where residents say Fourth of July celebrations get out of hand took action to make it safer this year. They hired off-duty security to try to put a stop to the celebratory shooting and illegal fireworks.

DALLAS - An Oak Cliff neighborhood where residents say Fourth of July celebrations get out of hand took action to make it safer this year. They hired off-duty security to try to put a stop to the celebratory shooting and illegal fireworks.

Shirley Thomas is afraid a bullet might come through her bedroom window. After all, one came through her kitchen ceiling last year.

"It was a circle in the top of my ceiling," she recalled. "So, I could’ve been in the kitchen, and you know, and the bullet could’ve come down and hit me."

But this year, neighbors are taking action.

"We’ve had big problems with fireworks and gunshots," said Ola Allen, the president of the Marsalis Park HOA. "We just don’t want to be terrorized on Fourth of July." 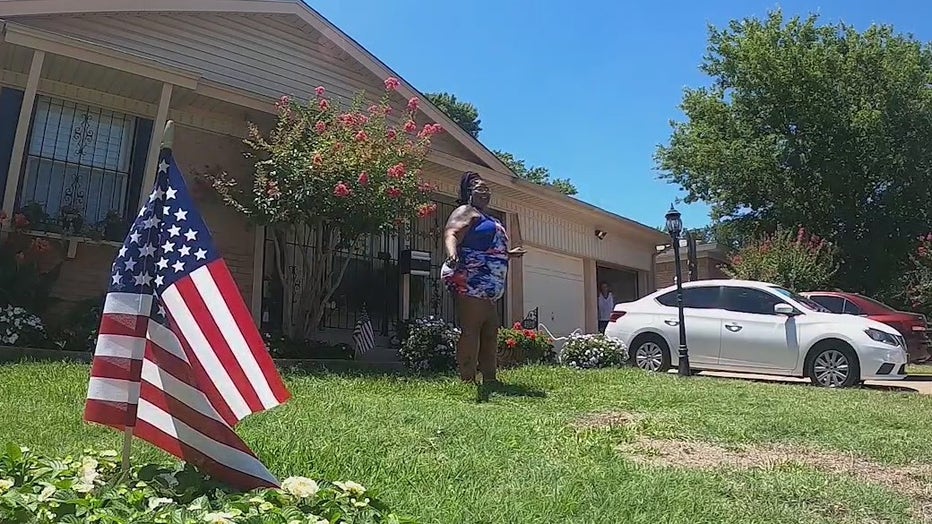 There have been way too many reports of gunshots and fireworks in the neighborhood on the holiday. It’s a concern for many elderly residents.

In years past, Dallas police have been slow to respond to the neighborhood. So, this year, residents are paying for two off-duty police officers to patrol the streets until early Wednesday morning.

"In an ideal world you pay your taxes, the police show up and everything’s great. But we’re not in an ideal world," said Andrew Moore, who lives in the area.

Dallas police said last Fourth of July, it had 922 service calls for illegal fireworks and 267 calls about random gunfire.

"I have to try to compose myself," said Jason Busby, a neighbor. "I shake."

Busby said he has PTSD from military service overseas and the holiday can be terrifying. It’s one reason neighbors don’t mind chipping in.

"I feel like if we’re paying the taxes, we should get the protection without having to pay extra. But I’m happy to pay extra if it takes care of my neighbors," Moore said.

6 dead, 24 wounded in shooting at Chicago-area Fourth of July parade

Dallas police said the option to have off-duty officers patrol is part of the expanded neighborhood patrol program.

The cost to hire off-duty Dallas officers varies. The price is set by each individual officer as they are basically working as private contractors.

"But as you know, we are short of police officers now so anything that we can do to make it better then that’s what we’re going to do," Allen said.

Some said they want people to have fun, but they believe the celebrations go too far.

"Gunshots is all over this community," Allen said. "And they pop until 3 and 4 a.m. in the morning."

Their hope is the patrol will give people living in Marsalis Park a little peace of mind.