WASHINGTON - A jury was selected Thursday in the seditious conspiracy case against the founder of the Oath Keepers extremist group and four associates in the highest profile prosecution stemming from the Capitol riot to reach a trial.

A panel of 12 jurors and four alternates was chosen after three days of questioning about their feelings concerning the insurrection on Jan. 6, 2021, and potential biases against the far-right group accused of plotting to use force to stop the transfer of presidential power.

Opening statements are expected to begin Monday in federal court in the case against Stewart Rhodes and his associates — the first Jan. 6 defendants to go to trial on the Civil War-era charge of seditious conspiracy.

The stakes are high for the Justice Department, which will try to prove that Rhodes spent weeks rallying his followers to prepare to use violence in a desperate bid to keep Republican Donald Trump in the White House. If convicted of seditious conspiracy, they could face up to 20 years behind bars.

Court records show the Oath Keepers, in the weeks leading up to Jan. 6, discussing paramilitary training and setting up a "quick reaction force" that could get weapons into Washington quickly if they were needed. Oath Keepers stashed weapons for the "quick reaction force" at a Virginia hotel and equipped themselves with communication devices, helmets, vests and other battle gear before storming the Capitol with the large mob of angry Trump supporters, prosecutors say.

Rhodes is not accused of going inside the Capitol, but telephone records show he was communicating with Oath Keepers who did enter around the time of the riot and he was seen with members outside afterward. 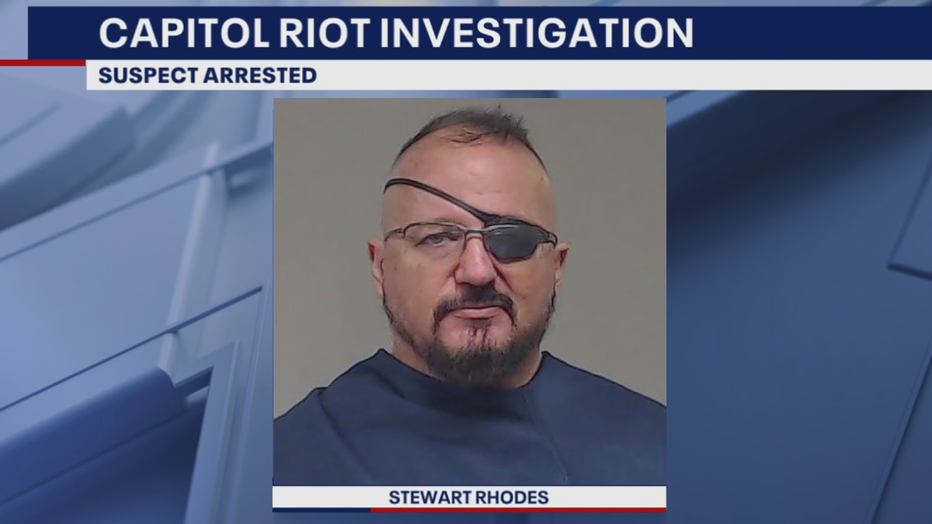 Drawing from an original pool of 150 potential jurors, the judge and lawyers individually questioned about half of them over three days. U.S. District Judge Amit Mehta disqualified dozens of the prospective jurors, mainly based on concerns about whether they could be fair and impartial.

Thomas Caldwell’s lawyer, David Fischer, asked many of the prospective jurors for their opinions about supporters of former President Donald Trump.

"I don’t understand the allegiance to him," said a woman who is an elementary school principal. The judge rejected defense lawyers’ request to dismiss her.

One of the many lawyers from the jury pool described Trump’s die-hard supporters as "misinformed" and referred to the Jan. 6 attack as an "insurrection." The judge disqualified him.

A few of the jurors are federal government employees, including a patent lawyer, a Transportation Security Administration program analyst and a man who works for the U.S. Government Accountability Office.

The GAO worker said he attended two Black Lives Matter protests after George Floyd’s killing by a police officer in Minneapolis. He said he has a "negative impression" of the Oath Keepers but believes he could be impartial.

Another juror is a man who works in human resources for the U.S. Citizenship and Immigration Services and owned a home on Capitol Hill. He said his father is a Trump supporter. He also said one of his neighbors is U.S. Magistrate Judge Zia Faruqui, who sits in the court where this trial is being held and often presides over hearings for Jan. 6 criminal cases.

A juror who works for the U.S. State Department’s Bureau of Consular Affairs said he doesn’t closely follow politics, adding, "I find the whole thing relatively distasteful." Someone else chosen for the jury works as a health care consultant and said he has close friends who are Trump supporters.

"I don’t understand why people did what they did on January 6th," he said.

Rhodes' lawyers have said his defense will focus on their client's belief that Trump was going to invoke the Insurrection Act and call up a militia to support his bid to stay in power. Rhodes' lawyers have said they will tell jurors that he is not guilty of seditious conspiracy because his actions in anticipation of what he believed would have been lawful orders from Trump under the Insurrection Act.

His lawyers have said the "quick reaction force" outside Washington was meant for defensive purposes if Trump did so. Lawyers for the other Oath Keepers have said they came to Washington only to provide security for figures such as Trump ally Roger Stone at events before the riot.

Nearly 900 people have been charged so far in the Jan. 6 riot and more than 400 have pleaded guilty or been convicted at trial. Sentences for the rioters so far have ranged from probation for low-level misdemeanor offenses to 10 years in prison for a retired New York City police officer who used a metal flagpole to assault an officer at the Capitol.