Hundreds more undocumented teenage boys from the U.S. border surge are expected to arrive at the shelter set up in Downtown Dallas Monday night.

DALLAS - Hundreds more undocumented teenage boys from the U.S. border surge are expected to arrive at the shelter set up in Downtown Dallas Monday night.

Governor Greg Abbott visited Tarrant County for a business roundtable but also raised some more safety concerns about the Dallas shelters and other facilities in Texas.

With more and more unaccompanied migrant teens arriving at the Kay Bailey Hutchison Convention Center in Dallas over the weekend for processing, the need for bilingual volunteers is great.

Hilda Duarte, a member of LULAC, registered to be a volunteer through Catholic Charities Dallas. The faith-based nonprofit is working with the American Red Cross to get the teens situated as the lengthy immigration process unfolds.

With more and more unaccompanied migrant teens arriving at the Kay Bailey Hutchison Convention Center in Dallas over the weekend for processing, the need for bilingual volunteers is great.

"You answer some questions, and then you watch a little video of do's and don’ts about sexual harassment and inappropriateness," she said. "Then after that, they give you a certificate that says you've gone through the process. And with that certificate, they'll put you on a list."

Duarte hopes to start volunteering with the migrant teens, males between the ages of 15 and 17, on Tuesday.

Texas nonprofit BCFS Health and Human Services is assisting the teens who don't have family in the U.S. with foster care.

"They do an extensive background check," Duarte said.

Democrat Congressman Henry Cuellar provide photos showing for the first time an inside look at the overflow conditions at a border patrol facility.

Mark Greenberg led Health and Human Services' administration for children and families under the Obama Administration. He now works with the Migration Policy Institute.

"What we can see is there is not enough shelter space right now for the children to go to the arrangements that they would typically go into," he said. 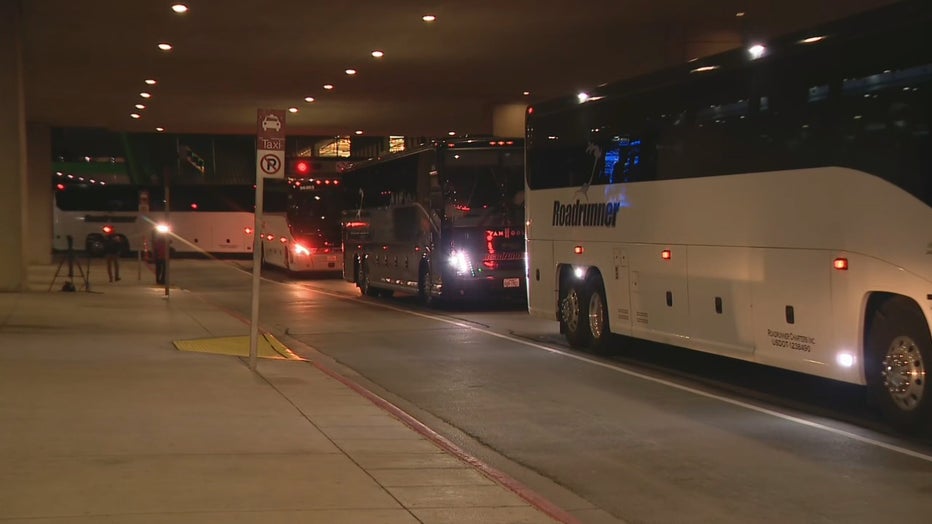 Last month, more than 9,400 children were apprehended at the southern border. Because of the surge, emergency intake sites at the Dallas convention center opened last week.

Greenberg says the goal is to find family members to be sponsors, a process that can take up to 45 days.

"Having the person apply to be a sponsor, doing an interview, doing a criminal records check, a sex abuse registry check, additional checks to try and minimize the risk that a child will be released into an unsafe situation," he said.

Governor Abbott was in North Richland Hills Monday for a business roundtable but talked about the issues at the border.

"Every single day that passes we learn more failures by the Biden administration," he said.

Gov. Abbott says he is concerned about the water conditions at a facility in midland. He also says he has information that dozens of children have tested positive for COVID at multiple locations in Texas.

HHHS says the undocumented boys in Dallas are tested for COVID every three days but would not confirm how many have tested positive.

Monday, Senator Ted Cruz sent a letter to President Joe Biden urging him to let media inside where children are being held.

"There is broad interest in want to understand the circumstances, and I think in that situation transparency is very important," he said.

On Friday, the Biden Administration denied Governor Greg Abbott's request to allow DPS troopers inside the convention center to interview the teens to find out if they're victims of human smuggling or sex trafficking.

LULAC is calling on Gov. Abbott to authorize the Texas Rangers to apply for a special visa with the U.S. Department of Homeland Security on behalf of all unaccompanied minors in Texas who might possess information and are willing to talk.

The governor was asked if he would consider the request.

"We first have to get in the door," Abbott said. "As far as things like Visas, that hasn't been considered yet because we have not been afforded the opportunity to do so."

It’s unclear how many volunteers have been approved to work with the teens.