There was a big announcement Friday from a North Texas organization that aims to bring healthy food to underserved communities.

DALLAS - There was a big announcement Friday from a North Texas organization that aims to bring healthy food to underserved communities.

The USDA considers that area of North Texas a food desert, with limited access to personal vehicles, public transit, and no grocery stores within a mile.

For many who live in South Dallas, the food grown at the farm is the only fresh food they're able to bring home.

"Because of this facility, and the way we're able to grow, we can produce leafy greens, cucumbers, herbs and such. Healthy food all year long," said Drew Demler, who is director of horticulture for Big Tex Urban Farms. "Even some of the places we donate to are full of food, but it's nothing fresh, so they're getting nonperishable items. Nothing wrong with that, but we're able to deliver something different fresh, full of nutrients, as fresh as possible." 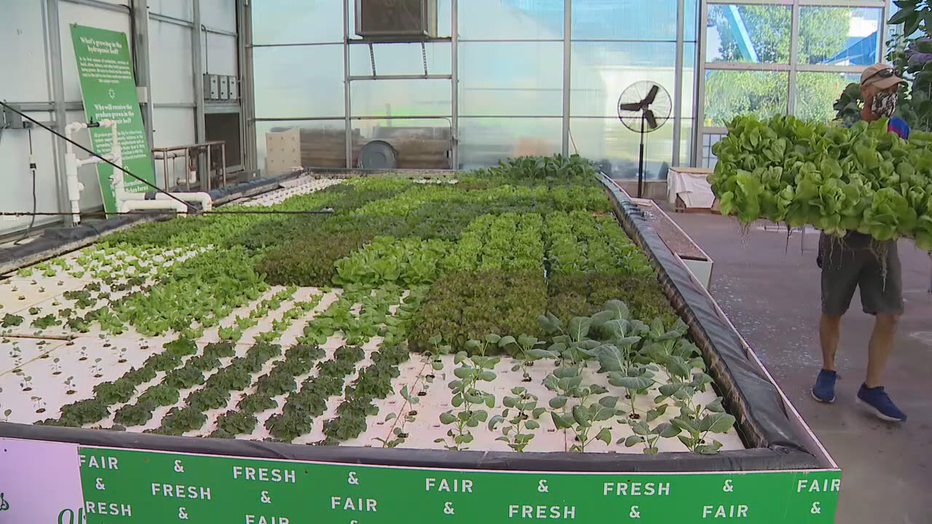 The idea for the State Fair of Texas to create its own farm in the middle of South Dallas began in 2016.

Now, it is a high tech way to maximize space and beat the elements to grow fresh fruits and vegetables year round.

The Urban Farm uses hydroponics with vertical growth techniques to cultivate produce in water, not soil. In addition to its urban farm at the fairgrounds, the state fair is working to teach the indoor farming concept around South Dallas.

South Dallas is an employment desert, education desert and in many cases a hope desert.

Dr. Doric Earle co-founded restorative farms in South Dallas with some help from the state fair.

"It's been underserved and neglected for years," he said. "If you can teach someone how to turn the dirt in their garden, maybe sell some and feed their family, you create a positive cycle of thinking."

Earle says the urban farm concept makes Dallas less dependent on the weather and other regions.

"Having food this close to your table is 40-80% more nutritious, the stuff you get from Mexico or California is engineered to travel first, then taste good second. this tastes better," he said.

While gardens used to be commonplace, Earle says the urban farm concept is working to re-equip people.

The goal now for the state fair urban farm is to keep growing.