WASHINGTON - The increasingly slim odds — and surprisingly thin outreach from the White House — for Neera Tanden’s nomination as head of the Office of Management and Budget are raising growing questions about how long the president will stick with her, in an early test of how he will use his limited political capital.

In the latest sign of trouble for Tanden, two Senate panels slated to take up her nomination, the Homeland Security and Governmental Affairs Committee and the Budget Committee, both postponed meetings scheduled for Wednesday.

For the third straight day, the White House batted off questions about Tanden’s path to confirmation after at least one key Democrat and multiple Republicans came out against her.

Facing steep headwinds, President Joe Biden must make the calculation whether it’s worth expending political capital to defend Tanden as he faces tough fights with a divided Congress on everything from his $1.9 trillion coronavirus aid package to coming legislative packages on infrastructure and immigration.

Biden said Tuesday that the administration was going to keep pushing on Tanden because "we still think there’s a shot, a good shot." And White House press secretary Jen Psaki told reporters on Wednesday that the White House is still "fighting for her nomination."

Tanden’s confirmation prospects were thrown into doubt over the last week after Democratic Sen. Joe Manchin of West Virginia said he could not support her, citing her controversial tweets attacking members of both parties.

Tanden needs 51 votes in an evenly divided Senate, with Vice President Kamala Harris acting as a tiebreaker. That means the White House can't afford to lose another Democratic vote, and one key centrist Democrat, Arizona Sen. Kyrsten Sinema, has yet to announce her position.

Sen. Lisa Murkowski, a moderate Republican from Alaska who has yet to say how she'll vote, suggested Wednesday that she was unimpressed by the Democrat. Murkowski said she still had more research to do on Tanden but that she told the White House her colleagues were "rightly" critical of Tanden’s tweets and that "some of them were clearly over the top."

"It seems that in this world we’ve kind of gotten numb to, to derogatory tweets," she said. "I don’t think that that is, that’s a model that we want to set for anybody."

The senator said she hasn’t spoken to Tanden but has been lobbied by White House staff and the case they’ve made is "that the president nominated her." Asked whether they offered anything more substantive in Tanden’s defense, Murkowski said, "Not that I can tell."

The growing opposition to Tanden had some already predicting her demise. 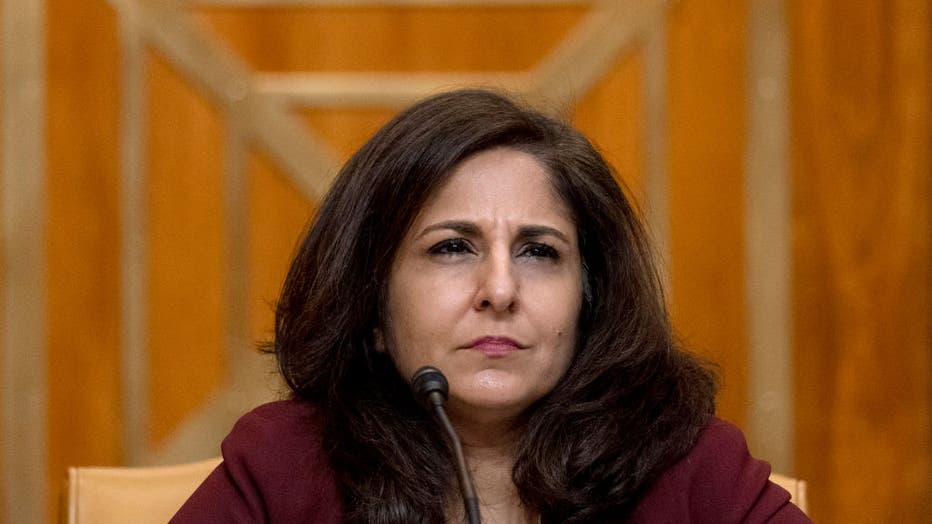 Neera Tanden, President Joe Bidens nominee for Director of the Office of Management and Budget (OMB), appears before a Senate Committee on the Budget hearing on Capitol Hill on February 10, 2021 in Washington, DC.

Tanden spoke this week with at least two of her detractors on the Democratic side, Manchin and Sen. Bernie Sanders, a Vermont Independent who caucuses with Democrats, and Psaki said she’s overall engaged with 44 senators.

And the administration pushed back against the idea that there hasn't been extensive lobbying on her part. According to the White House, from Friday to Tuesday, Tanden spoke with 15 senators — some of whom she'd spoken to previously, and some she hadn't. Overall, the administration has engaged in outreach to 28 targeted Senate offices on Tanden's nomination since Friday.

But Senate aides from both sides of the aisle said the outreach from the White House surrounding her nomination had been puzzling from the start.

The Biden White House did not give advance notice of her planned nomination to Sanders, according to a person familiar with the process. And multiple Republican Senate aides said contact from the White House concerning Tanden’s nomination in recent days had been minimal.

According to Senate aides on both sides of the aisle, the light touch from the White House on such a controversial nominee had lawmakers wondering why the administration put Tanden forward to begin with. As one Democratic Senate aide described it, there simply wasn’t a good reason to vote for a nominee who had openly — and at times viciously — criticized members of both parties, especially with other qualified candidates waiting in the wings.

By Wednesday, the apparent front-runner to replace Tanden was Shalanda Young, a former staff director for the House Appropriations Committee who has been actively pushed by members of the Congressional Black Caucus. A person familiar with the discussion said House Democratic leadership has backed Young for the job.

Other names mentioned include Ann O’Leary, a former chief of staff for California Gov. Gavin Newsom, and Gene Sperling, who served as director of the National Economic Council under Presidents Bill Clinton and Barack Obama.

Tanden worked for Hillary Clinton and leads the Center for American Progress, a liberal think tank. She is the daughter of immigrants from India and would be the first woman of color to lead the White House budget office.

A number of Democratic operatives and lawmakers have accused Tanden’s opponents of exhibiting sexism and hypocrisy for suddenly caring about her controversial tweets after letting four years of Donald Trump’s outbursts on Twitter slide.

"The ship sailed on so-called ‘mean tweets’ five years ago when Donald Trump descended the escalator, announced his campaign and continued on with the most caustic personal tweets aimed at members of his own party, the Democratic Party and private citizens that anyone has ever seen," said Jim Kessler, a vice president at the centrist group Third Way.

One person close to the White House noted that Murkowski and Sinema have still not made their positions clear, and said the current approach to the Tanden controversy is simply to allow it to run its course. The person, who spoke on condition of anonymity to discuss internal thinking, said that after a number of high-profile spats with Manchin, White House officials are wary of being seen as too deferential to him and other moderate Democrats.

Lawmakers have based their objections to Tanden mostly on sharp tweets she sent in the past that caustically criticized both Republican and Democratic lawmakers. She has apologized and deleted many of the tweets.