A former Dallas police officer was sentenced Wednesday to 10 years in prison for killing an unarmed man in his apartment, which she said she mistook for her own unit one floor below.

DALLAS - A former Dallas police officer was sentenced Wednesday to 10 years in prison for killing an unarmed man in his apartment, which she said she mistook for her own unit one floor below.

As people outside of the courtroom reacted angrily to the 10-year sentence given to Amber Guyger for killing Botham Jean in his apartment, believing it was too lenient, his brother was allowed to address her directly from the witness stand.

Brandt Jean told Guyger that he thinks his brother would have wanted her to turn her life over to Christ, and that if she can ask God for forgiveness, she will get it.

"I don’t even want you to go to jail. I want the best for you because I know that’s exactly what Botham would want you to do. And the best would be give your life to Christ…I love you as a person. I don't wish anything bad on you," he said to the 31-year-old Guyger, before adding, "I don't know if this is possible, but can I give her a hug?"

Amber Guyger was sentenced to 10 years in prison for the fatal shooting of Botham Jean. After her sentencing, his brother forgave her and embraced her.

The judge said he could, and Brandt and Guyger stood up, met in front of the bench and embraced while Guyger cried in a moment of grace and forgiveness that no one saw coming.

The feeling in court changed in that moment. This trial was tragic, salacious, raised questions about police practices, and has received attention worldwide.

But in that moment, everyone was humbled, watching a teenager forgive the person who killed his brother.

MORE: ‘I love you as a person’: Botham Jean’s brother hugs Amber Guyger after she gets 10 years in prison 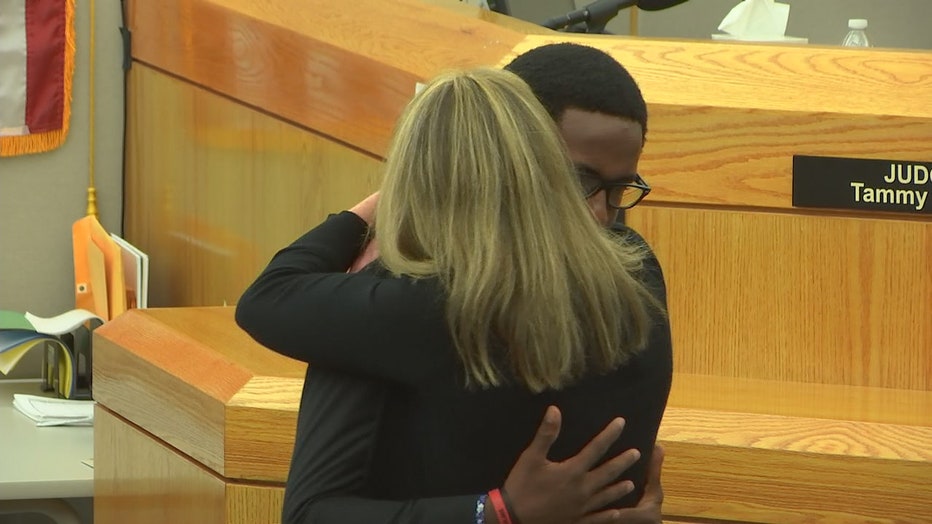 A short time later, Judge Tammy Kemp spoke with Jean’s parents, before giving them both a hug.

She then went into chambers, got her own bible, and brought it to Guyger.

She read John 3:16, "For God so loved the world," and guided Guyger through accepting Jesus Christ into her life.

The two prayed together, and during that time, Guyger did just as Jean's brother said he would have wanted, asking for salvation there in the courtroom. 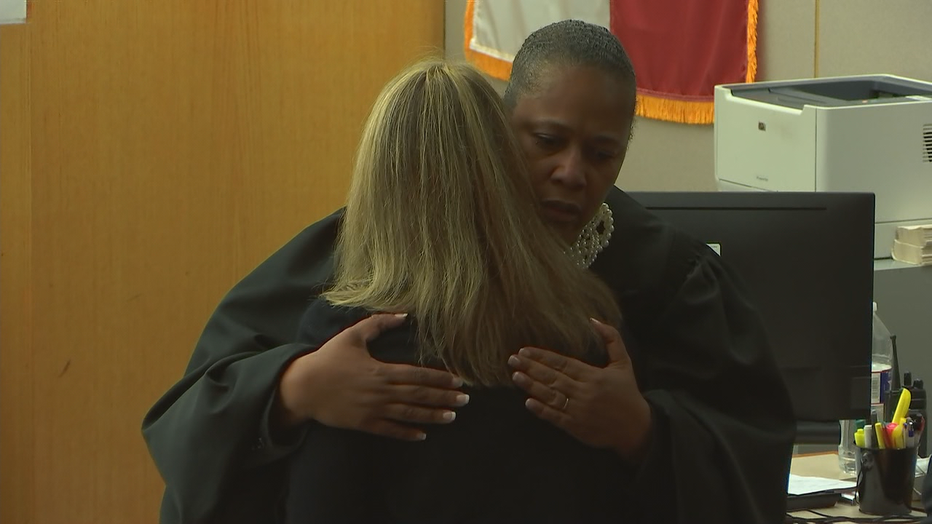 Jurors could have sentenced the former officer to up to life in prison or as little as two years, but prosecutors asked them to send her to prison for 28 years, which is how old Botham Jean would have been if he was still alive.

The 10-year sentence, which will make Guyger eligible for parole after five years, was met with boos and jeers by the crowd outside of the packed courtroom, with one woman saying, "It's a slap in the face."

Speaking to reporters after the hearing, Jean's mother, Allison Jean, criticized the investigation into her son's death, saying "the corruption that we saw during this process must stop" and that it's up to the people of Dallas to bring about change.

Jean's mother said the 10-year sentence would be for Guyger's "reflection and for her to change her life."

She also criticized Guyger and the police training to shoot to kill.

"If Amber Guyger was trained not to shoot in the heart, my son would be alive today. He was no threat to her. He had no reason to be a threat to her because he was in his own apartment," Allison Jean said.

Creuzot also called Brandt Jean's embrace of Guyger an "an amazing act of healing and forgiveness that is rare in today's society ... especially for many of our leaders."

He said that in his 37 years in court, he has never seen anything like it, and he hopes that the whole country can learn from Jean’s brother.

"If your 18-year-old brother can heal and express healing in that fashion, in his words and in his deeds, I would hope that the greater community, not just Dallas but all of Texas and all of the United States, could gain a message from that," he told reporters.

Dallas' mayor, Eric Johnson, issued a statement saying he, too, was "deeply moved" by Brandt Jean's actions: "I will never, ever forget the incredible examples of love, faith and strength personified by Botham, Brandt and the entire Jean family."

Neither Mike Mata, who heads the Dallas Police Association, nor Toby Shook, one of Guyger's lawyers, immediately responded to requests for comment about the verdict. Guyger's family was escorted out of the courtroom through a side stairway right after her sentence was handed down.

Judge reads off sentence handed down to Amber Guyger

Judge Tammy Kemp reads off the sentence handed down by the jury to Amber Guyger after she was found guilty of murder for fatally shooting Botham Jean.

Defense attorney Toby Shook said “every murder is different” and urged the jury to give a shorter prison sentence. He said the prosecution was trying to paint Guyger as a racist with her texts sent during a Martin Luther King, Jr. parade.

“I’ll ask you to look at her whole life,” Shook said, asking them to not be focused on texts.

He recapped stories about Guyger reaching out to a drug addict and her friendship with a co-worker at a restaurant. That co-worker told a story about her going out of her way to help her when she had a baby.

Shook asked jurors not to bring in feelings about injustice from other police shootings, where officers weren’t punished for killing people.

Prosecutor Mischeka Nicholson went back over the text messages from the parade and the pro-police memes Guyger posted on social media. She said they speak to Guyger’s character and should be taken into consideration by the jury.

She asked the jury to not be intimated by the wide range of punishment for murder in the state of Texas, five to 99 years. She said that this case is not meant for a minimum sentence.

Closing arguments in the punishment phase took place Wednesday afternoon and wrapped up just after 2:30 p.m. The jury returned with its decision on a sentence about 90 minutes later.

On Wednesday morning, Bertrum Jean broke down on the stand while talking about his son and their close-knit family.

He said after Jean moved away from their home in the Carribean island nation of St. Lucia to go to college, he would call home every Sunday after church to catch up. 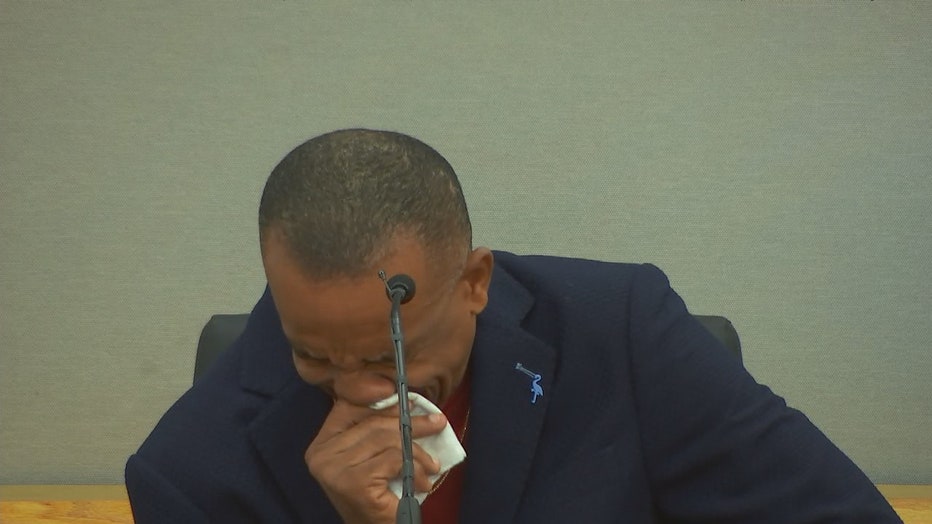 "How could we have lost Botham? Such a sweet boy. He tried his best to live a good honest life. He loved God. He loved everyone. How could this happen to him?" he said.

Alexis Stossel, Jean’s classmate and one of his best friends from Harding University, teared up as she spoke about him being a natural leader who everyone seemed to gravitate toward.

Stossel said she didn’t see Jean’s last text to her until after she got a phone call about his death. She said she dropped to the floor and started screaming. She called him seven times and got no answer.

“I can’t imagine living life without my other person,” she said.

After the state rested, the defense called Guyger’s mother to the stand. She also broke down on the stand, saying her daughter feels remorse.

“She’s always telling me she wishes she could take his place. She feels very bad about it,” Karen Guyger said. 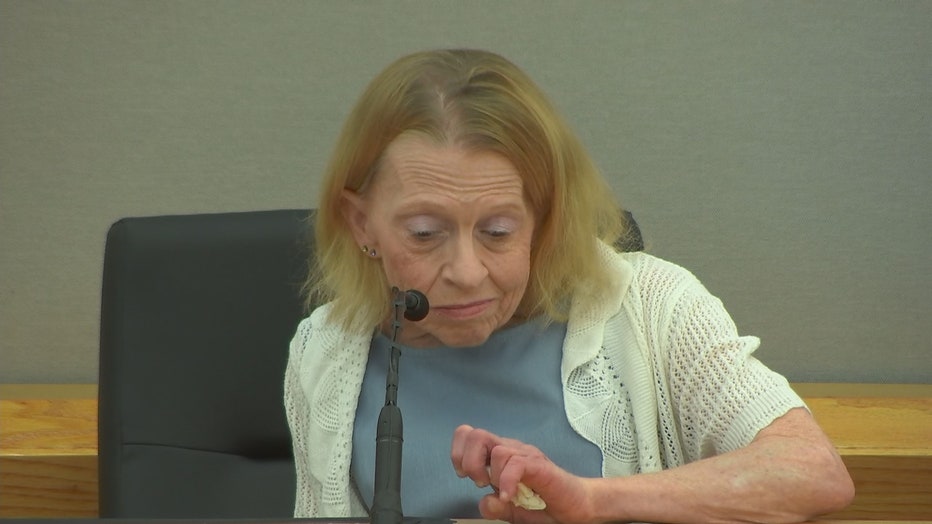 Alana Guyger revealed that her sister was molested by their mother’s boyfriend at a young age. Guyger’s attorneys were trying to show the jury she had remorse for what happened.