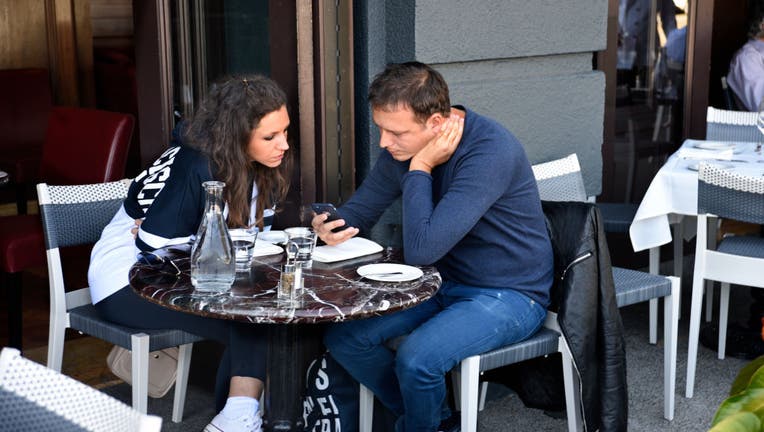 A couple visiting Sausalito, California, look at their smartphone after ordering lunch at a restaurant. (Photo by Robert Alexander/Getty Images)

After a year in which the COVID-19 pandemic normalized working from home, virtual weddings and video chatting with loved ones, it probably comes as no surprise to learn the number of Americans who admit to being almost constantly online has risen by 10% since 2015.

Even before the pandemic, a plethora of new streaming platforms, cable alternatives, food and grocery delivery services and smart devices have come about since the Pew Research Center began tracking this data six years ago.

But according to their latest survey, conducted from Jan. 25 to Feb. 8, it’s people older than 30 who are driving the surge.

RELATED: 2020: Things that changed in the tumultuous year may never go back to the way they were

Researchers found 31% of respondents admit to constant internet use. Another 48% said they log in several times a day and just 6% said they limit their online activity to about once a day.

Researchers have noticed the percentage of near-constant users between 18 to 29  years old has remained 48% since 2019 and people older than 65 are stagnant at 8%.

People younger than 50 make up the bulk of those who admitted to near-constant internet activity. Forty-four percent of 18 to 49-year-olds signaled constant use — twice as many as those ages 50 to 64.

About 8% of respondents said they used the internet weekly less than once a day and 7% said they have log no internet use at all.

Respondents older than 65 make up just 8% of near-constant users.

The difference between the terms endemic, epidemic and pandemic

Health officials define the level of disease in society using terms like endemic, epidemic, outbreak and pandemic. Here's what each term means.

The study didn’t find much of a gender gap when it came to constant usage, with men at 32% and women at 30%. But race, education, income and geography indicated more trends related to usage.

Black people (37%) and Hispanic people (36%) were most likely to say they used the internet constantly, followed by White people (28%).

Forty-two percent of respondents with a college degree admitted to near-constant usage, compared to the 29% of those with some college or 23% of those with a high school diploma who answered the same.

People who make more than $75,000 a year were most likely to signal constant online activity, coming in at 40% of that demographic.

And those who said they frequently use the internet live in urban areas 37% of the time.