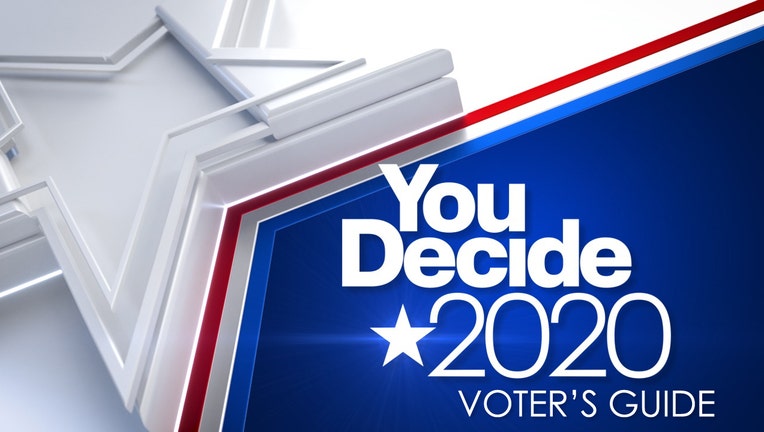 DALLAS - Texas voters can head to the polls starting Tuesday, Oct. 13 to cast ballots in this year's general election. The presidential battle is getting the most attention, but there are races at all levels that are being hotly contested across North Texas.

For information on how to vote, click here. This is a look at key races affecting voters in our region.

President Trump is still considered the favorite to win Texas’ 38 electoral votes, but Democrats are seriously challenging the GOP’s stranglehold at the presidential level for the first time in decades. An average of recent polls gives Trump a small lead in a state that hasn’t gone blue since Jimmy Carter in 1976. Biden’s campaign is spending money on staff and advertising in the final weeks of the campaign. While Texas’ rural areas are more conservative than ever, the suburbs that have powered GOP dominance in the state are sliding away and trending Democratic. Trump won Texas by 9 points in 2016, a margin that could be narrower this time.

Incumbent Republican U.S. Sen. John Cornyn faces the toughest re-election challenge of his career against a well-funded opponent, Democratic candidate and veteran MJ Hegar. Cornyn’s advertising campaign has been focused on a group that has been repelled by the Trump administration – women voters. A frequently seen ad touts a bill that ends rape kit backlogs. Hegar is running as a centrist and has tried to tie Cornyn to the Trump administration’s uneven response to the coronavirus pandemic. Still, every poll shows Cornyn leading the race, and at this point he’s still the favorite to get re-elected.

The fact that the GOP is defending a Collin County district that has long been solid red shows the challenges the party faces this election cycle with Suburban voters. Sam Johnson was the longtime seat holder before retiring in 2018. Republican Van Taylor won the ’18 primary and general elections to take over the seat and is up for re-election for the first time against a well-funded Democratic opponent. Lulu Seikaly is an SMU graduate and the first viable Democratic opponent for the seat in decades. That said, Taylor won by ten points in 2018 and is the favorite to win in 2020.

Incumbent GOP Rep. Ron Wright is undergoing treatment for cancer as he seeks reelection for the first time. This seat was held for years by Joe Barton and covers Arlington, Waxahachie and Corsicana. Wright’s eight point win in 2018 was the narrowest by a GOP candidate in decades. Democrats are running Stephen Daniel, an attorney who grew up in North Texas. Wright is considered the favorite to win.

This is the nastiest and hardest fought race of the cycle in North Texas. Beth Van Duyne is the former mayor of Irving who went on to work in the Trump administration and is now back to try to keep the seat in GOP hands after Kenny Marchant announced his retirement. Marchant narrowly won re-election in 2018 against a poorly funded Democratic opponent. The seat is considered a prime pickup opportunity for Democrats, who nominated former Carrollton-Farmers Branch ISD trustee Candace Valenzuela as their candidate. The district is filled with suburbs of Dallas, Denton and Tarrant counties – places where college-educated voters and women have defected from the GOP.

The Democratic incumbent knocked out Pete Sessions handily in 2018 and is defending his seat against a well-funded GOP opponent. Colin Allred has touted his work in opening a new VA hospital campus in the district, which includes Dallas and some suburbs to the northeast. Genevieve Collins has attempted to paint Allred as a party-line voter under the control of House Speaker Nancy Pelosi. Allred is considered the favorite to retain the seat, especially in a year with presidential election turnout levels.

Texas Democrats have a legitimate shot at taking control of the Texas House for the 2021 session. But they will need to keep flipping seats in areas where they won a total of 12 seats in 2018. North Texas is ground zero for their efforts to flip the nine seats they need to capture a majority for the first time in decades.

These two Collin County seats were the definition of solid red for years. But the GOP margin of victory in 2018 makes them high-priority races for Democrats this cycle. Flipping two state house seats blue in Plano, the definition of a typical conservative Texas suburb, would continue a trend that has seen the Democratic Party pick up wins in demographically diverse suburbs in Texas.

Outgoing State Representative Jonathan Stickland did not win any popularity contests among his colleagues while in the Texas House. His pugnacious conduct even rubbed fellow Republicans the wrong way. After winning re-election by only 2 points in 2018, Stickland decided it was time to step away from politics. Democrats would love to take his seat. Cason is a former Bedford councilman and campaigning as a Christian conservative in the H-E-B-area seat. Jeff Whitfield is an Air Force veteran and grew up in the Mid-Cities and has not held elected office.

Democrats picked up several Dallas-area State House seats from Republicans in 2018, and came very close in two others. One of them was the Park Cities-based seat was narrowly held by incumbent Morgan Meyer (he won by just 220 votes). Now it’s a rematch of the same two candidates last time. Joanna Cattanach is a teacher and former journalist. Both campaigns have plenty of funding to run TV ads and be visible between now and Election Day.