According to the Fort Worth Fire Department, there were 203 grass fires on Monday. In the city of Dallas, the numbers were high too.

Two of the officers remain in the hospital. The third hit by gunfire is recovering at home.

Haltom City police say the two officers hospitalized have a long road to recovery and are still scheduled for surgeries.

Neighbors are now noticing possible red flags before the shooting. But at the time, they never imagined what would come. 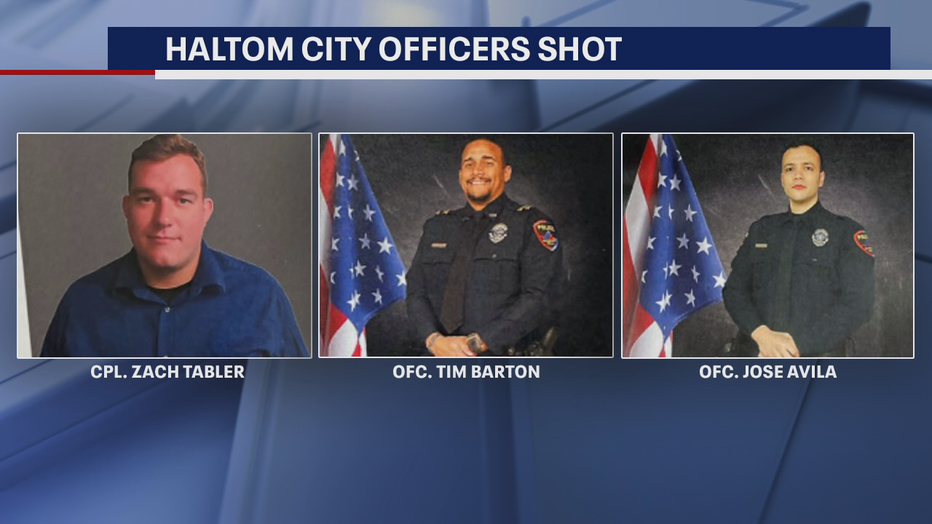 Officers Corporal Zach Tabler and Officer Jose Avila remain in the hospital. Officer Tim Barton is recovering at home with his family.

Police say all three are in good spirits as the investigation is handed over to the Texas Rangers.

Meanwhile, neighbors are replaying 28-year-old Edward Freyman’s movements hours before the murders and shootout with police.

"He came over that morning 11 o’clock and asked us if we had a crowbar that he could borrow to move a boulder," she recalled.

Ring video shows Freyman walking home with the crowbar. Less than 30 minutes later, Ketron says Freyman returned it where she hasn’t touched it since.

Freyman then knocked on a different neighbor’s door to tell them their gate was open. The woman even shook the shooter’s hand.

Just before 7 p.m., gunshots rang out.

According to police, Freyman shot and killed 32-year-old Amber Tsai at her home. Neighbors believe the two dated.

33-year-old Collin Davis was found fatally shot outside the home after investigators say Freyman opened fire from inside.

Neighbors also tell FOX 4 Davis showed up on a motorcycle with groceries.

A GoFundMe says Davis expected to have a small hang with his long time gal pal.

Tsai’s family says she had a humble heart and always made friends.

"And I am so sorry for her loss," Ketron said.

Police responded to the shooting call only to be met with hundreds of rounds.

A woman inside her home across the street was also shot but survived.

Police say Freyman later took his own life after being found armed with a rifle and a handgun.

A motive is still unclear.

Freyman served in the Army for five years from 2014 to 2019 and was a current member of the Texas National Guard.

But to Ketron, he was a stranger who left the neighborhood shaken.

"In disbelief this happened on our street," she said.

All three injured officers are on administrative leave per police as the investigation continues.

The department says when the first officers responded and learned how severe the incident was, nearly every officer on duty rushed to the scene to help.