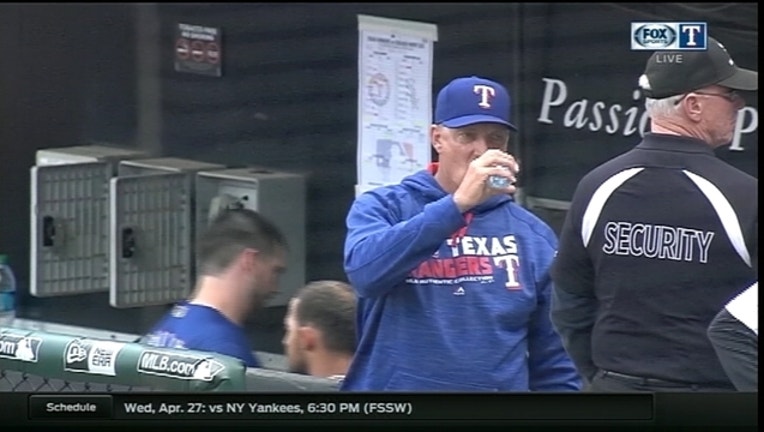 Latos (4-0), who signed a $3 million, one-year deal with Chicago in February, was charged with one run and seven hits. The 6-foot-6 right-hander has allowed two earned runs in 24 1/3 innings while matching his win total from all of last year.

David Robertson, who blew a save opportunity on Saturday for this first time this season, struck out the side in the ninth for his seventh save.

Dioner Navarro homered and drove in two runs as Chicago won for the fifth time in six games. Brett Lawrie added two hits and an RBI.

Derek Holland (2-1) allowed three runs and five hits over 6 1/3 innings for Texas, which was swept for the first time this season.

Touted Rangers rookie Nomar Mazara belted a long drive to right in the first inning for his first homer since his major league debut on April 10. The ball cleared the visiting bullpen and landed about five rows into the bleachers.

Navarro tied it in the third with a drive to left field for his first homer of the season.

Chicago then grabbed the lead in the fifth. Melky Cabrera started the rally with a leadoff walk and advanced to third when Lawrie followed with a double to right field. Cabrera scored on a wild pitch and Navarro made it 3-1 with a sacrifice fly.

The Rangers tried to answer in the sixth, putting runners on the corners on singles by Ian Desmond and Elvis Andrus. But Latos, on his 106th and last pitch of the game, escaped by getting Ryan Rua to ground into a 1-4-3 double play.

Latos pumped his fist in jubilation as he headed to the dugout.

Rangers: LHP Cole Hamels was scratched from his scheduled start on Monday because of a strained left groin muscle. The injury is not considered serious and there is no plan to put him on the disabled list. He skipped one start last August because of the same issue.

White Sox: C Alex Avila was placed on the 15-day disabled list with a right hamstring injury. To take his place on the roster, C Kevan Smith was recalled from Triple-A Charlotte. Avila, who is batting .214 in 10 games this season, was injured running the bases in the sixth inning on Saturday.

Rangers: With Hamels injured, Texas has yet to name a starter for Monday night in the opener of a three-game series against the Yankees. RHP Nathan Eovaldi (0-2, 6.11 ERA) goes for New York.

White Sox: Chicago has not yet named a starter for Monday for the opener of a three-game series at Toronto. RHP Marcus Stroman (3-0, 4.13 ERA) goes for the Blue Jays.