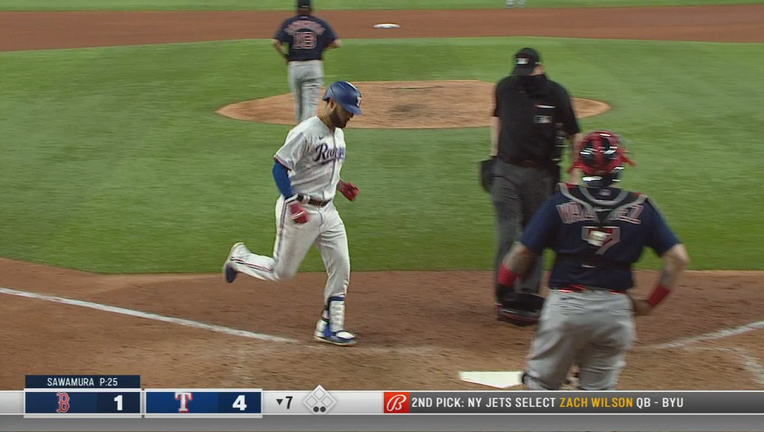 ARLINGTON, Texas - Kyle Gibson is pitching like the No. 1 starter the Texas Rangers needed him to be, and unlike what happened in his first career opening day start.

Gibson gave up one run while pitching three-hit ball over six innings and got a big boost from battery mate Jose Trevino as the Rangers beat the AL East-leading Boston Red Sox 4-1 in a series opener Thursday night.

Trevino's first homer of the season came on the second pitch thrown by reliever Hirokazu Sawamura with two outs in the sixth, a tiebreaking two-run shot soon after Gibson (3-0) had thrown his final pitch.

Gibson, who struck out four and walked three, has allowed only three earned runs over 33 innings (0.82 ERA) in five starts since getting only one out at Kansas City in the the shortest opening-day start in franchise history.

"I don’t know if I can come up with an adjective," manager Chris Woodward said when asked to describe the difference. "This is what I was expecting. ... I think I’m not surprised."

Boston had tied the game 1-1 in the top of the sixth when Rafael Devers had an RBI double on a full-count pitch. That snapped the Gibson's home scoreless streak at 25 2/3 innings, dating to last season and matching the second longest in Arlington since 1994. Alex Verdugo scored after leading off the inning with a double to deep center.

In the five-game stretch, Gibson has lowered his ERA from 135.00 to 2.16 — and plenty of his buddies have texted him about how that's changed. But he really never let the disappointing opening start affect him after that day.

"I don’t know that anybody would want to, you know, put themselves through not making it out of the first. It’s it’s a feeling I never felt up until that point. And it’s a lonely feeling," Gibson said. "Part of the role that I’m in now is being the old guy and trying to show some of these guys how to deal with adversity. I think that’s my job."

The Red Sox had only three hits, their fourth game in a row with five or less, though they won the previous three.

Sawamura took over with two outs in the bottom half of the inning for former Rangers lefty Martín Pérez (0-2), with a runner on base after shortstop Xander Bogaerts had a fielding error. Trevino drove an 88 mph slider 411 feet over the wall into the Red Sox bullpen in left-center for a 3-1 lead.

"We have a righty in that situation, we pushed Martin to get out there, we don’t make a play, and we felt like that was a good matchup for us," Cora said. "And we got burned."

Isiah Kiner-Falefa homered to straightaway center off Sawamura in the seventh, when Kike Hernandez ran into the wall and fell to the ground.

Ian Kennedy struck out two in a perfect ninth for his fifth save in as many attempts after John King and Joely Rodriguez each worked a hitless and scoreless inning.

Pérez struck out seven without a walk, though he did hit a batter in his 5 2/3 innings after consecutive starts of fewer than four innings for the first time in his career..

The Rangers led 1-0 on Adolis Garcia's sacrifice fly to the warning track in center, when Hernandez made a nice running catch with his glove extended high above his head. Joey Gallo scored from third after opening the inning with an opposite-field double and taking the extra base when left fielder Alex Verdugo's throw got past third baseman Devers, as well as Bogaerts and Perez.

Cora said the throw took a upward hop on Devers.

"He tipped it, and as soon as it tipped, Xander's going to third base and the ball just kept rolling," Cora said. "It's one of those freak plays that it’s nobody’s fault. It’s just a bad hop and you try to make a play, and just kept rolling. A tough one."

Red Sox: DH J.D. Martinez was replaced by a pinch-hitter in the eighth because he had migraine-related symptoms. Cora said switch-hitting utility player Danny Santana (foot infection, left elbow surgery recovery) will start a rehab assignment with Greenville on Tuesday when the Class A team opens the the minor league season.

Rangers: LF David Dahl was hit by a pitch near his right elbow when the left-handed hitter was batting against Pérez in the fifth. Dahl stayed in the game.