Investigators said they have issued a warrant for a black box following a single-vehicle crash involving sports legend Tiger Woods.

Tiger Woods is "doing better" and could be on track to be released from the hospital if all goes according to plan, Rory McIlroy said Tuesday night.

McIlroy appeared on "The Tonight Show with Jimmy Fallon" and said he spoke to Woods "a little bit" as the legendary golfer recovers from a scary crash that occurred late last month.

"He’s doing better," McIlroy told the late-night host. "I think all the guys have reached out to him and hopefully, if things go well over the next week or so he might be able to get home and start to recover at home, which would be great for him, see his kids, see his family."

"He’s doing better and just I think all of us are wishing him a speedy recovery at this point," he added.

McIlroy revealed that he was one of the golfers whom Woods texted during this past weekend’s Arnold Palmer Invitational at Bay Hill Golf Course in Florida.

"He texted me some words of encouragement before the final round of Bay Hill on Sunday and things didn’t quite go to plan, and he was the first one to text me and be like ‘What’s going on here?’ So even from the hospital bed, he’s still giving me some heat," he said.

Bryson DeChambeau also said Woods texted him to give some encouragement.

The Los Angeles Sheriff’s Department is still investigating the circumstances surrounding the crash and recently executed a search warrant to retrieve information from the "black box" of the 2021 Genesis Woods was driving at the time of the wreck. 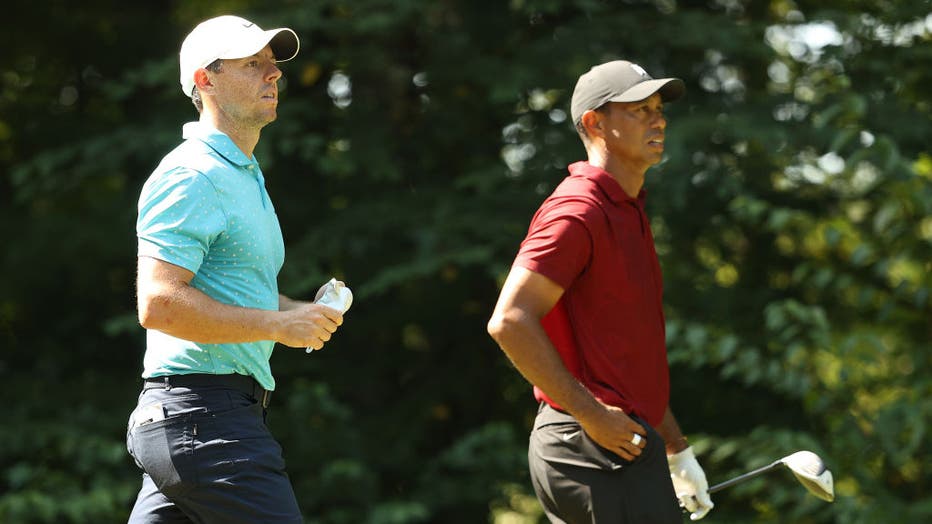 NORTON, MASSACHUSETTS - AUGUST 23: (L-R) Rory McIlroy of Northern Ireland and Tiger Woods of the United States look on from the ninth tee during the final round of The Northern Trust at TPC Boston on August 23, 2020 in Norton, Massachusetts. (Photo b

Woods was seriously injured but officials have said there was no evidence he was impaired at the time. He suffered severe leg injuries.