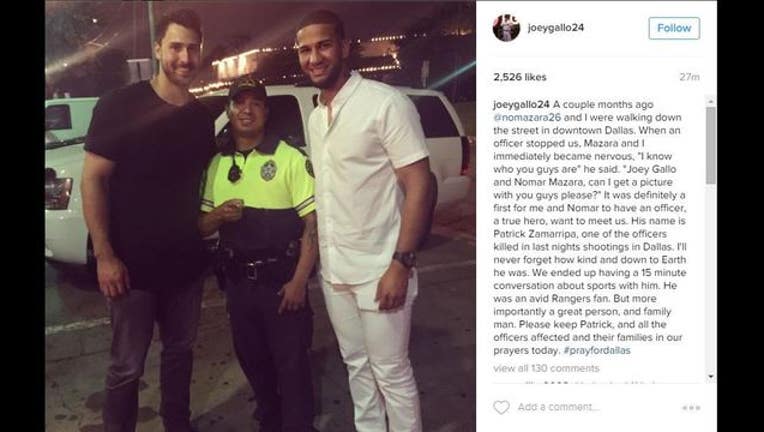 DALLAS, TX- - Texas Ranger Joey Gallo took to social media Friday to share a fond memory he and a teammate share with one of the Officer's killed in Thursday's shooting.

Gallo shared a photo on Intstagram of he and teammate Nomar Mazara posing with Officer Patrick Zamarripa.

The MLB star recalls passing Officer Zamarripa in the street, and feeling nervous when he first encountered the Officer.

Then, Zamarripa asked for a photo and explained he was an avid Rangers fan. Gallo recognized the experience as a first for him, in having a true hero want to meet him.

He goes on to say that he, Mazara and Officer Zamarripa went on to have a lengthy conversation about sports.

Zamarripa, who would have turned 33 next month, was married with a toddler and school-age stepchild. He joined the Navy shortly after high school in Fort Worth, serving eight years on active duty and then in the reserves, according to the Navy.

After doing security work in the Navy, a police career seemed a natural fit once he returned to Texas in 2009. Zamarripa joined the Dallas force about five years ago and recently was assigned to downtown bicycle patrols, his father said.