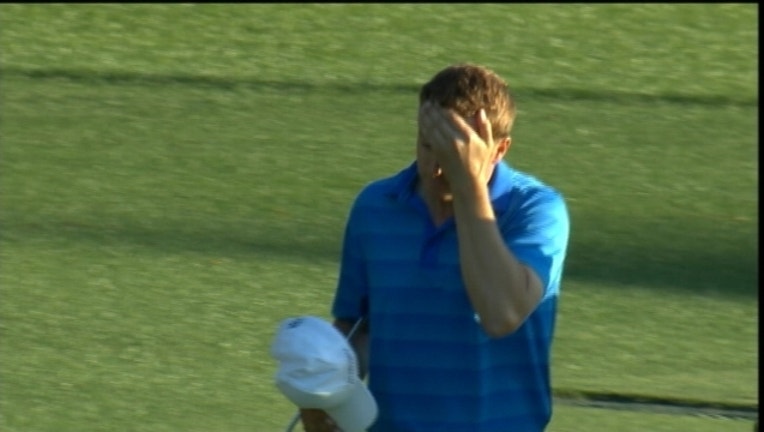 Jordan Spieth understands his meltdown at the end of the Masters will follow him. And three weeks later, Spieth's not quite ready to say he's over letting a five-shot lead in the final round morph into that awkward ceremony in the Butler Cabin that ended with him slipping the green jacket on Danny Willett following an ugly and very public collapse.

Still, let's not get carried away.

"I'm not taking it very hard," Spieth said Tuesday, while attending a FedEx event in suburban Pittsburgh ahead of a practice round on Wednesday at Oakmont, where he will try to defend his U.S. Open title next month.

"I've got ladies at the grocery stores putting their hand on me and going, 'Really praying for you; how are you doing?' I'm like, 'My dog didn't die. I'll be OK. I'll survive.' It happens."

It just hadn't really happened to Spieth during the 22-year-old's sprint to the top of the world rankings, a dash that included a pair of major championships and a reputation as one of the game's steadiest players as the holes dwindled and the stakes rose. In the span of 30 minutes during the final round at Augusta, it disappeared. A bogey at 10. Another at 11. That seemingly endless sequence on 12 where he hit the ball into Rae's Creek not once but twice on his way to a quadruple bogey 7 that cost him control of the tournament.

"It was just bad timing on the wrong hole," Spieth said. "And you know, it is what it is, and I'll move on. If you're in contention at a major, hopefully 50-plus times in your career, something like that is bound to happen. Just don't let it happen again."

Spieth endured the uncomfortable post-round ceremony with Willett, whose brilliant closing 5-under-par 67 will be forever tied with the way Spieth let it slip away. Spieth admitted "this one will hurt" in the aftermath and he's spent the last few weeks trying to decompress and get ready for the daunting test that awaits at Oakmont in June.

So Spieth did what most early 20-somethings with time to burn and money to spend did: he went on a well-appointed Spring Break. Spieth joined Rickie Fowler, Smylie Kaufman and Justin Thomas for a getaway at a tropical resort that Fowler chronicled via Snapchat, a vacation that included a little golf and a lot of unwinding.

"We were having fun, we were relaxed," Spieth said. "We were able to play golf and golf was kind of secondary to the relaxation part of the trip."

It will be back to work on Wednesday when Spieth takes a long look at Oakmont, which is prepping to host its ninth U.S. Open and first since 2007, before heading to Florida for next week's Players Championship. Spieth plans to treat his preparation for the rugged test in the Western Pennsylvania hills much the same way he got ready for Chambers Bay last summer, when he edged Dustin Johnson and Louis Oosthuizen by a stroke. Spieth will try to get a feel for Oakmont this week then arrive early in June for a far different kind of test than the one found at the three other majors.

Angel Cabrera captured the Open in its last visit to Oakmont with a four-round total of 5 over par. Compare that to the 18 under par Spieth posted while winning at Augusta in 2015 or even the 5-under he put up at Chambers Bay. It will take nerves to survive and regardless of what that stretch at the Masters looked like, Spieth isn't worried about his confidence being rattled should he be in the mix on Father's Day.

"Our team can draw on the wins, and that's what we're going to do," he said. "We've now had a chance to win coming down the stretch in six majors and we've won two of them, including the last five and 2014 Masters. So that's still a pretty good percentage, if you're in contention six times, you win two of them, a third of the time. Considering my age, and hopefully with continued good health and continued improved play, if we keep that percentage up, we'll be all right."