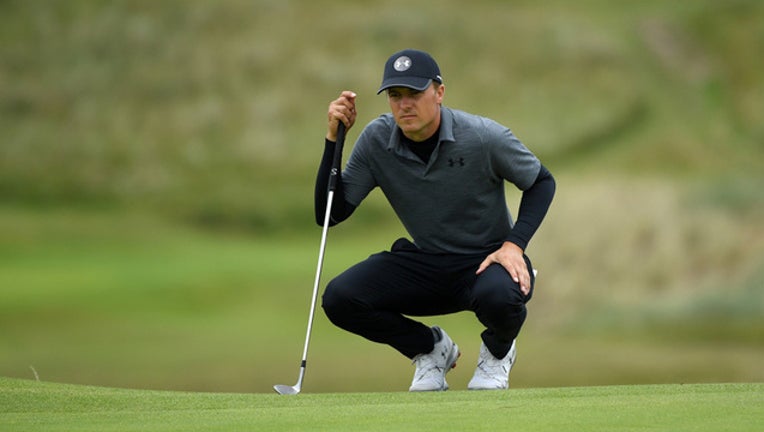 PORTRUSH, Northern Ireland (AP) - Jordan Spieth knows he can win the big ones. Perhaps that's why he saves his best golf for them.

The three-time major winner, still only 25, moved his name up the leaderboard at the British Open on Friday with a superb four-hole run near the end of the front nine. He birdied the fifth and sixth, made eagle on the seventh and birdie on the eighth to take him to 6 under, briefly tied for the lead.

He ended up with a 4-under 67 at Royal Portrush to bring him to 5-under 137 on a mild morning on the Dunluce Links.

"I always get pumped up for major championships," Spieth said. "Clearly I try to peak for majors. And then this style of golf I always - I've always found to fit my game pretty well."

That game really started to shine in 2015 when Spieth won the Masters and U.S. Open. He then finished a stroke out of a playoff in the British Open at St. Andrews. He capped his major season with a second-place finish at the PGA Championship.

In 2017, he won the British Open, finishing three strokes ahead of Matt Kuchar at Royal Birkdale. That was his last victory.

Spieth had an up-and-down day in the first round this year, but with the improved weather on Day 2 came a better score.

"I putted a bit better. Different wind change so certain holes played harder than others and others became easier," said Spieth, who finished his round about an hour before the rain started to fall. "I felt like I played the easy holes well and then I avoided the pot bunkers today more than I did yesterday. But I certainly found the rough more today than I did yesterday.

"At some point I hope to be playing off the short grass this week."

Although he failed to improve his score late in the round, he did manage to make par on some of the toughest holes on the course.

The par-3 16th and par-4 18th are rated as two of the hardest. Spieth landed his tee shot just right of the green on 16, chipped up the sharp slope and nailed a short putt for par. On the 18th, he drove down the middle of the fairway, one of the few he hit Friday, put his approach on the green and just missed his birdie putt.

"I'm in contention," Spieth said. "I feel like if I can continue to improve each day, hit the ball better tomorrow than I did today, and better on Sunday than Saturday, then I should have a chance with how I'd feel on and around the greens."