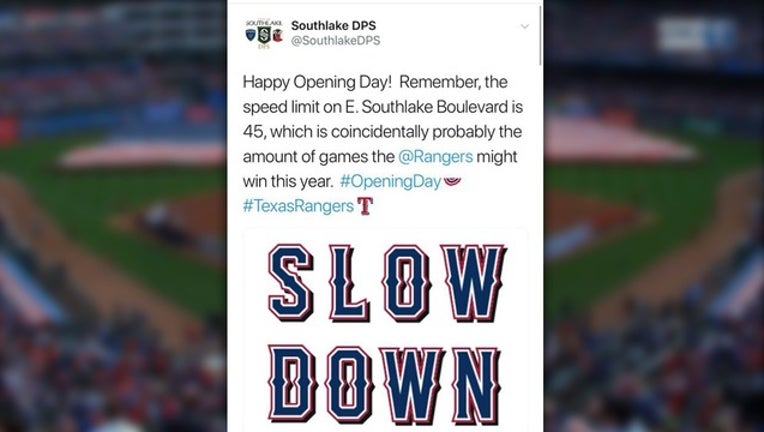 While most North Texans were cheering on the Texas Rangers on Opening Day, one police department made a joke that not everyone found too funny.

In a now-deleted tweet, Southlake DPS’s Twitter wrote, “Happy Opening Day! Remember, the speed limit on E. Southlake Boulevard is 45, which is coincidentally probably the amount of games the Rangers might win this year.”

Southlake DPS got mixed reaction from their tweet. While some found the humor in the comment, others thought the department should stick to catching criminals.

“Just write your speeding tickets and stay out of comedy,” wrote Eeric Brewer. “Your not very good at it.”

After a few hours, Southlake DPS pleaded for mercy from loyal Rangers fans.

“We’ve got jokes!” they wrote before taking down the tweet and apologizing. “As you can see we obviously, OBVIOUSLY all love the Rangers. We apologize for our joke earlier and wish the Rangers a fantastic season!”