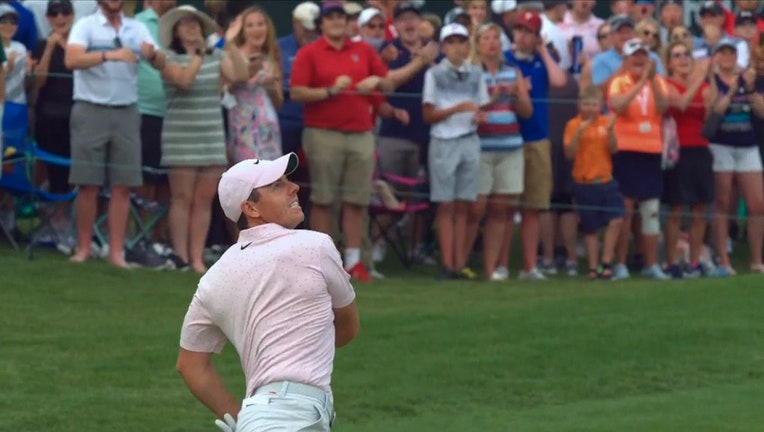 CHARLOTTE, N.C. - Rory McIlroy found his comfort zone at Quail Hollow and left with a trophy he badly needed.

McIlroy closed with a 3-under 68 and made it tough on himself at the end Sunday, driving into the hazard left of the 18th fairway and needing two putts from 45 feet for a one-shot victory in the Wells Fargo Championship.

What mattered was ending 18 months since his last victory in the HSBC Champions in Shanghai, along with finding a strong semblance of his game as he prepares to return to Kiawah Island for the PGA Championship.

McIlroy seemed to be on the verge of choking up at winning on Mother’s Day, thinking of his mother, Rosie, and wife Erica. She was at Quail Hollow with their daughter, Poppy, and McIlroy doted on them before signing his card.

McIlroy seized control with two splendid bunker shots, getting up-and-down for birdie on the reachable par-4 14th and the par-5 15th, and then holding on at the end.

Abraham Ancer ran off three straight birdies and nearly closed with a fourth one, posting a 66 for a runner-up finish, the fourth of his career as the Mexican seeks his first PGA Tour title.

McIlroy finished at 10-under 274 for his 19th career victory, and his third at Quail Hollow.

Alex Cejka won the Regions Tradition on Sunday in only his third PGA Tour Champions start, beating defending champion Steve Stricker with a birdie on the first hole of a playoff.

A childhood refugee from communist Czechlosovokia (now the Czech Republic), the 50-year-old Cejka made a 10-foot birdie putt on No. 18 and Stricker missed an 8-footer with a chance to extend the playoff at Greystone Golf & Country Club.

Cejka had turned a three-stroke deficit into a two-shot lead over the final nine holes for a 5-under 67. His winning putt was from a similar spot to the one Stricker made for birdie in regulation to force the playoff.

Cejka, who grew up in Germany, got into the field as an alternate Monday when Jay Haas withdrew and left with full exemption. He made his first two PGA Tour Champions starts as a Monday qualifier, and tied for second at the Chubb Classic.

Swede Robert Karlsson was third at 14 under after a 69.

Austin Eckroat and Pierceson Coody got the United States off to a fast start, and Cole Hammer and Stewart Hagestad finished off Great Britain & Ireland in the Walker Cup.

Ricky Castillo won again, too, and the Americans took five of the 10 afternoon singles matches and tied another at Seminole Golf Club for a 14-12 victory.

The Americans won for the third straight time to take a 38-9-1 lead in the biennial event first played in 1922.

Nathaniel Crosby, the son of late crooner Bing Crosby, became the first U.S. captain with back-to-back victories since Buddy Marucci in 2007 and 2009.

Eckroat overwhelmed Mark Power 7 and 6 in the opening match, and Coody beat Alex Fitzpatrick 3 and 1 in the second. Castillo topped John Murphy 2 and 1 to become the only player to finish the two-day event 4-0.

Hammer beat Ben Schmidt 4 and 3 in the second-to-last match, and Hagestad put the Americans over the top when he was 4 up with four to play in a 4-and-2 victory over Ben Jones.

Quade Cummins gave the U.S. a half-point, winning the 18th with a par to pull even with Barclay Brown.

GB&I took 2 1/2 of the four points in the morning foursomes to pull within a half-point.

Ariya Jutanugarn closed with a 9-under 63 to win the Honda LPGA Thailand by a stroke and become the first home winner in 14 years.

Jutanugarn won her 11th LPGA Tour title and first since July 2018. She finished at 22-under 266 to edge fellow Thai Atthaya Thitikul, the 18-year-old who missed a 4-foot birdie putt at the last to force a playoff.

Patty Tavatanakit, the 54-hole leader and winner of the first LPGA Tour major of the year, closed with a 70 to tie for third with Angel Yin (66), three-time Thailand winner Amy Yang (64) and So Yeon Ryu (64).

Jutanugarn’s unblemished round included nine birdies and went some way to making up for her collapse in 2013 when she blew a two-shot lead on the 18th hole with a triple bogey that handed victory to South Korea’s Inbee Park.

Garrick Higgo of South Africa made a

The 21-year-old Higgo won for the second time in three weeks on the European Tour, which has been in the Canary Islands for the last three weeks.

Higgo finished at 27-under 257 for his third European Tour title. He moved to just outside the top 50 in the world, and the victory might be enough for him to get into the U.S. Open.

Maverick Antcliff of Australia closed with a 65 to finish second.

COLLEGE GROVE, Tenn. (AP) — Austin Smotherman won the Simmons Bank Open for the Snedeker Foundation for his first Korn Ferry Tour title, closing with a 3-under 69 for a three-stroke victory.