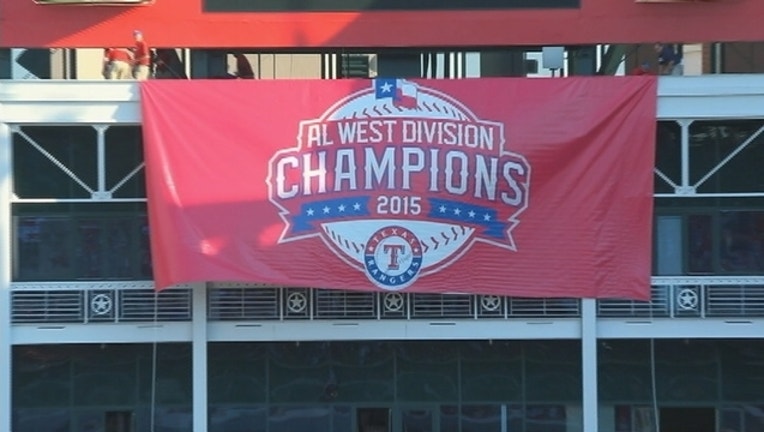 ARLINGTON, Texas (AP) — First-year manager Jeff Banister stood in a corner of the Texas Rangers clubhouse watching players celebrate, with champagne spraying all over the place.

A year after their 95 losses were the most in the American League, two months after they were still eight games out of first place and three days after ensuring themselves a postseason spot, the Rangers clinched the AL West title with a 9-2 victory over the Angels on the last day of the regular season.

Cole Hamels pitched a three-hitter, his first complete game since Texas acquired the ace left-hander from Philadelphia at the end of July, and team leader Adrian Beltre hit a go-ahead homer in the win Sunday, which eliminated Los Angeles from playoff contention.

Moments after the final out, an AL West championship banner was hanging beyond center field at the ballpark. A championship flag was hoisted on one of the six poles atop the massive video board in right field.

"This means a lot. I have never been on a team with as much heart," said shortstop Elvis Andrus, the Rangers' most-tenured position player and a member of their only World Series teams in 2010 and 2011. "This means a lot more than what we did a few years ago because of who these guys are. They have so much passion and energy. It has been a crazy year."

Texas, which lost ace Yu Darvish to Tommy John surgery before the season even started, plays its first AL Division Series game since 2011 on Thursday at Toronto.

The Rangers clinched no worse than a wild card with their 5-3 win in the opener of the four-game series Thursday night before the Angels, the 2014 division champs, won the next two games with ninth-inning rallies.

Texas gave up five runs in the ninth Saturday to lose 11-10 to the Angels as second-place Houston won its third straight game. According to Elias, Texas was the first team in MLB history to lose a potential league- or division-clinching game in the last week of the season after having a lead of at least four runs in the ninth inning.

Texas left no doubt in its 162nd game with a six-run seventh inning that included an infield RBI single by Beltre, who has driven in 33 runs his last 23 games, and a two-run double from Andrus.

"This game has a cruel sense of humor," Banister said. "From what happened yesterday, we got punched in the mouth. When that happens, you find out what you are made of, and you saw that in everything they did today."

The Angels needed to win their finale and have Houston lose in Arizona to force a tiebreaker game for the AL's second wild card. The Astros lost, but already had clinched the wild card after Los Angeles lost.

"It's obviously disappointing," star center fielder and MVP candidate Mike Trout said. "Can't say I'm happy. I'm obviously not happy, but proud I am about this group. We fought. Obviously could have put our heads down easily in August."

Texas has won its last 10 games started by Hamels, traded from the Phillies right after he pitched a no-hitter. The 2008 World Series MVP is 7-1 with Texas and 13-8 overall this season.

The Rangers were eight games out of first place after an 11-inning loss to San Francisco on Aug. 1, when Hamels left with a three-run lead in the eighth inning of his Rangers debut.

Many viewed the acquisition of Hamels, who is signed through 2018 with a club option for 2019, as a move for future seasons. Instead, the Rangers reached the playoffs for the seventh time.

"I liked this team a lot," Hamels said. "We knew we could do something special."

After Albert Pujols hit his 40th homer in the first to give the Angels a 2-0 lead, Hamels allowed only one more hit, Shane Victorino's one-out double in the second.

"I felt comfortable and confident," said Hamels, who struck out eight with two walks. "I knew if I kept grinding it out, the team would score."

Texas went ahead to stay in the fifth on Beltre's 18th homer, which landed just beyond the wall in right field for a 3-2 lead against Garrett Richards (15-12), who started on three days' rest for the first time in his career. That came after Shin-Soo Choo, who has reached base in 53 of the last 55 games, had an infield single.

During the 37-minute half-inning when the Angels used five pitchers and Texas scored six times, Hamels stayed loose by throwing balls into a net in an area behind the dugout.

"What I normally do in the offseason when it snows outside," he said. "I start throwing against the wall."

Rangers: A day off Monday before working out at home Tuesday and then traveling to Toronto for Game 1 of the ALDS.

After winning AL West titles in 1996, 1998 and 1999, the Rangers lost each time in the division series to the New York Yankees. The Rangers won their other division titles in 2010 and 2011 and both times went to the World Series. Texas lost the first one-and-done AL wild-card game at home in 2012, then missed the playoffs the following season after losing a wild card tiebreaker.