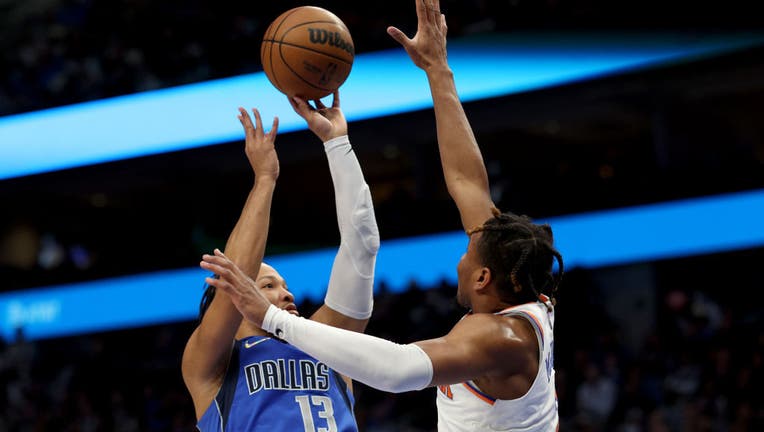 DALLAS, TEXAS - MARCH 09: Jalen Brunson #13 of the Dallas Mavericks shoots the ball against Miles McBride #2 of the New York Knicks in the second half at American Airlines Center on March 09, 2022 in Dallas, Texas. NOTE TO USER: User expressly acknow

DALLAS (AP) - Julius Randle scored 26 points against his hometown team and the New York Knicks won for the fifth consecutive time in Dallas, blowing out the Mavericks 107-77 on Wednesday night.

RJ Barrett added 18 points for the Knicks, who won their third straight following a seven-game losing streak and improved to 3-2 on a season-long seven-game road trip.

The Mavericks missed their first 19 3-point shots while falling behind by 28 in their lowest-scoring first half of the season. Dallas trailed 61-34 at the break as a five-game winning streak ended.

Luka Doncic scored 17 of his 31 points in the third quarter, when the Mavericks got within 14 before consecutive buckets from Randle steadied the Knicks.

"I love the way our guys are coming out and the intensity that we’re playing with and the togetherness on both sides of the ball," New York coach Tom Thibodeau said. "The challenge doesn’t stop. We can’t feel too good about ourselves."

New York, which is chasing the final play-in spot in the Eastern Conference, swept the two-game season series from the playoff-bound Mavericks, winning by an average of 26.5 points.

The Mavericks shot a season-worst 13.6% from long range (6 of 44) and 31.4% overall. Reggie Bullock was 0 of 8 and went scoreless, while Jalen Brunson, Davis Bertans and Maxi Kleber combined to miss 14 more without a make.

"It was probably our best defensive performance of the year," Randle said.

Doncic was the only Dallas starter in double figures as the Mavericks finished with a season-low 11 assists.

"We might have overdribbled a little bit, but we had great looks," coach Jason Kidd said. "Sometimes you’re going to lose a game. Tonight was the night. We had a great homestand. You can’t let one game ruin that, and we’re not. It’s over."

All five New York starters were in double figures, with double-doubles from Alec Burks (15 points and 11 rebounds) and Mitchell Robinson (11 and 11). Evan Fournier scored 10 points.

Randle rallied from a poor start shooting to finish 8 of 19 with eight rebounds and five assists. The Dallas native scored 44 points at the Mavericks last season and was coming off a career-best 46 points in a 131-115 win at Sacramento.

"It’s automatic, man, playing in front of my mom and obviously my wife and sons were here," Randle said. "I always want to give them a good show."

Knicks: Cam Reddish was out after injuring his right shoulder two nights earlier against the Kings. ... Taj Gibson was the sixth double-figure scorer with 11.

Doncic picked up his 14th technical foul with the game just about out of reach in the fourth quarter. He is two technicals from a one-game suspension, though that count resets for the playoffs. Doncic has had one tech rescinded and said the latest should be challenged as well.

The Knicks kept their comfortable lead despite shooting 36% after halftime. Dallas was down 17 early in the fourth quarter but scored just 10 points the rest of the way. The Mavericks finished with 12 points in the fourth, matching their lowest for any quarter this season (12 in the third quarter of a 106-75 loss at Denver on Oct. 29).

Knicks: At Memphis on Friday.

Mavericks: The second stretch of five consecutive road games in the span of a month starts Friday in Houston. This time it's an actual road trip. The previous set, in which Dallas went 4-1, was interrupted by the All-Star break.