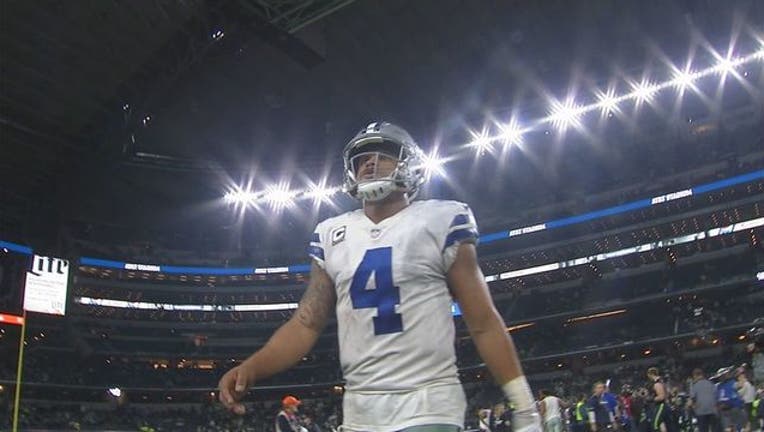 ARLINGTON, Texas (AP) - Now that Dak Prescott knows how the other half lives in the NFL, the Dallas quarterback can see where it was easy to think every season would be like his remarkable rookie year.

Missing the playoffs just wasn't much of a thought after an NFC-best 13 wins - until the Cowboys lost a postseason elimination game to Seattle and suddenly have only a winning record to play for going into the season finale at Philadelphia on Sunday.

"It makes me respect this league, the game, the preparation and everything it takes to be great in this league so much more," Prescott said after Sunday's 21-12 loss to the Seahawks.

"Having a first year like I did, I think you almost want to take things for granted. And then you come in the second year and a lot of things go against you and it's tough."

On the field and off, Prescott went on to say - an acknowledgment that running back and fellow rookie star Ezekiel Elliott's six-game suspension over domestic violence allegations was high on the list of what went wrong for Dallas (8-7).

Elliott returned against the Seahawks, but many of the things that plagued Prescott without him continued. He made poor decisions and poor throws, things he mostly avoided while setting an NFL rookie record for passer rating last season.

And since it was in such a high-stakes game, the bad overthrow to Elliott that resulted in Justin Coleman's 30-yard interception return for a touchdown was magnified.

The throw behind Dez Bryant that went through the drop-prone receiver's hands for the second pick was another example of how critical mistakes have replaced the clutch moments of a year earlier.

"I think as much as anything else it was the turnovers," coach Jason Garrett said. "He's done such a good job taking care of the football throughout his career, and that is not an easy thing for a young quarterback to do."

Franchise passing leader Tony Romo conceded the job to Prescott last year when he was ready to return from a preseason back injury and the Cowboys were in the middle of a franchise-record 11-game winning streak. Then Romo retired to the broadcast booth when the season ended.

Owner and general manager Jerry Jones is all in with Prescott despite a big increase in interceptions (13 compared to four last season, with four returned for touchdowns).

The Seattle loss was the second time in six games the Dallas offense didn't score a touchdown, all the more alarming with Elliott back.

As good as Prescott was as the NFL Offensive Rookie of the Year last season, he lost his only playoff game for the top-seeded Cowboys - the same thing Romo had done nine years earlier, when he was forging a reputation as a good, but not clutch, quarterback.

After throwing the most interceptions for a Dallas quarterback since Romo's 19 in 2012, Prescott will face questions about his staying power in his third season.

"The future is bright," said Prescott, who will have significant drops in completion percentage and passer rating.