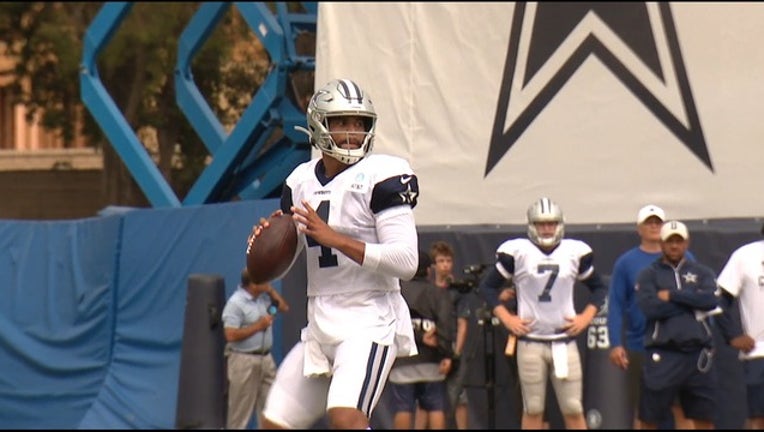 Both reported to training camp on time as they prepare for the final year of their deals, unlike running back Ezekiel Elliott. The two-time rushing champion has been holding out for more than a week, seeking a new contract with two years left on the existing one.

By that, Cooper means he's about to make $10 million more than Elliott ($13.9 million to $3.9 million). But Cooper also talks to Melvin Gordon, the San Diego running back who also is holding out.

"I have a fifth-year option coming up to where I get paid a significant amount of money if I play on that," Cooper said. "But the running back position, you know Melvin is one of my good friends, and he tells me the contract he would play on this year isn't even ... it's nothing. It's peanuts to an elephant."

Cooper was the fourth overall pick of the draft in 2015, a year before Elliott went with the same choice. Elliott's salary is supposed to jump to $9.1 million next year. Gordon was drafted 11 spots behind Cooper, putting his fifth-year salary at $5.6 million this season.

All three of those players surpass the $2 million base salary for Prescott, drafted 131 spots behind Elliott in the fourth round before winning NFL Offensive Rookie of the Year honors in 2016 after Tony Romo got hurt. The Cowboys have two NFC East titles and a 32-16 record with Prescott.

But there was never talk about Prescott staying away from California. He acknowledged during the offseason that "generational money" was coming (his deal could surpass $30 million annually) and he had faith an agreement could be reached.

"I'm not here to talk about my contract and that stuff," Prescott said early in camp. "For me it's to come out here and focus on this, not be distracted by any of that stuff, any of that conversation, just focus on being better, just being the best player I can be and making sure everyone around me is as well."

After that answer, Prescott started responding with various versions of, "I couldn't hear you." He got the idea from owner Jerry Jones, who opened camp by pretending he couldn't hear a reporter asking about what it would take for Jason Garrett to get another contract. The coach's five-year deal is expiring this year as well.

Jones and executive vice president of personnel Stephen Jones, his son, face the daunting task of getting their three offensive stars signed with deals and a pair of emerging linebackers in Jaylon Smith and Leighton Vander Esch looming in coming years.

Stephen Jones says the club tries to sell players on taking less money because of what they can make through the visibility of the Cowboys, although that argument could use a boost from a trip past the divisional round of the playoffs. Dallas hasn't done that in almost 25 years.

Jerry Jones alluded to the added value of playing for Dallas while reiterating that he doesn't have any concern about getting deals done with all three.

The incentive for the Cowboys to get Cooper signed comes from giving up this year's first-round pick in a midseason trade with Oakland last year. While his career highs are modest (1,153 yards receiving, seven touchdowns), his arrival was a significant boost for a stagnant offense.

Like Prescott, staying away from camp wasn't a consideration for Cooper.

"I guess I'm just optimistic about it and it's something that's going to happen, whether it's today, tomorrow or whenever," Cooper said. "I'm not worried about me getting hurt or something like that and it not happening. I just don't think like that."

The remaining question is whether the third piece of the star trio will be around when the season starts. Prescott has always believed Elliott will be.

"Obviously we miss the player that he is," Prescott said. "But I know that he's getting better. I know that he's working on his game. He's in shape. He's going to make sure that he comes back and when he's back on this team he's a better player than before camp or before the spring."

The lingering question is who gets paid first.