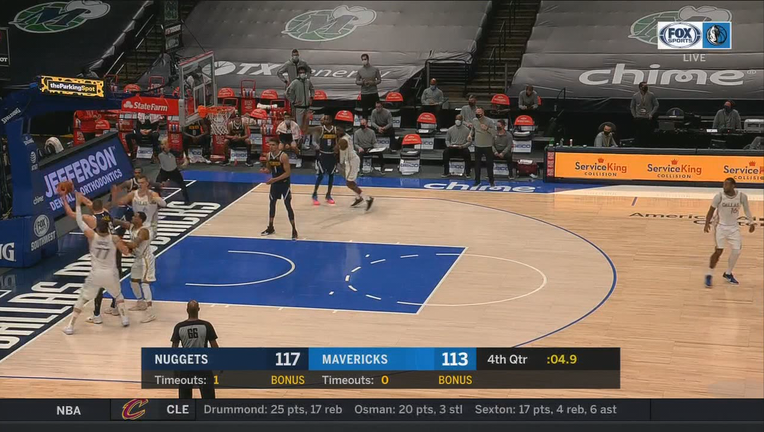 DALLAS - Michael Porter Jr. tied his season high with 30 points and the Denver Nuggets overcame Jamal Murray's ejection for a shot to the groin of Dallas guard Tim Hardaway Jr. to beat the Mavericks 117-113 on Monday night.

Porter was 6 of 10 from 3-point range, including a go-ahead bucket to start a decisive 7-0 run late in the fourth quarter after the Mavericks had rallied immediately following the incident involving Murray and Hardaway.

Luka Doncic had 35 points, 11 rebounds and a season-high 16 assists for his league-leading sixth triple-double. The Dallas star broke a tie for the NBA lead with Nikola Jokic, who had 20 points and 10 rebounds for the Nuggets.

The Nuggets improved to 3-0 on a five-game road trip with their fourth straight victory and are 7-2 since an overtime loss to the Mavericks in Denver. It was the third game in four days, and the first two went to overtime in Phoenix.

"This was character," coach Mike Malone said. "Coming off two overtime games in Phoenix. And we found a away to get the win."

Denver was setting up on offense early in the second half when Murray stumbled backward after colliding with Hardaway. Murray got up and reached between Hardaway’s legs with his right arm, prompting Hardaway to double over.

The official closest to the contact blew the whistle to stop play with 4:51 left in the third quarter and conferred with the other referees. The initial call was a foul on Murray, and it was upgraded to a flagrant-two foul on a video review.

"I guess he was just frustrated that they didn’t call a foul," Hardaway said. "I was just trying to do the best I can to deny the ball. The rest of it speaks for itself. It happens in a game. But it doesn't even matter at this point. We lost."

Malone said he asked crew chief Zach Zarba for an explanation, and Zarba told him the replay was "fairly obvious."

"There was a lot of physicality between those two," Malone said. "They came out very aggressive in the third quarter, which we knew they would. Hopefully it’s nothing more than Jamal getting ejected tonight and we can just use it as a learning experience."

The Nuggets led 80-73 when the game was stopped, and Hardaway scored the next seven points in just 23 seconds to get the Mavericks even before they went on to take their first lead since early in the first quarter. Hardaway scored 16 of his 19 points in the third.

Denver scored the first seven points of the fourth quarter to go back in front before Dallas got even at 104 with five minutes remaining.

Doncic put the Mavericks ahead with a short jumper before Porter hit a 3 then had a dunk the next trip down. Another 3-pointer from Porter, who also had eight rebounds, put Denver up 114-107 with 41 seconds to go.

"I don’t think the ejection was something that fired us up," Doncic said. "We continued to play, continued to fight for every possession. We’ve just got to be better on defense."

Nuggets: JaMychal Green had 17 points and eight rebounds. ... Monte Morris led Denver with six assists. ... Facundo Campazzo, Doncic’s teammate with Real Madrid the season before the Mavericks drafted the Slovenian star in 2018, was scoreless in 12 minutes after the rookie from Argentina was a healthy scratch in the first Dallas meeting. ... Malone said P.J. Dozier

Mavericks: Kristaps Porzingis had 16 points on 6-of-18 shooting after missing a game to rest his surgically repaired right knee.

Porter's third game back after missing 10 because of COVID-19 protocols was his best, although he was coming off a double-double in the second victory against the Suns, which went to double overtime.

"He didn’t skip a beat," Green said. "I don’t know if he’s got a gym at his own house or whatever. Seems like he didn’t miss a game."

Richardson and Finney-Smith have missed nine games since they were left behind after the first meeting with the Nuggets in Denver. Powell, who went through shooting drills on the arena’s main court before the game, has missed eight games.

Nuggets: At Miami on Wednesday in the fourth game of a five-game trip. The teams split two games last season, including a Heat victory in the first game of the restart for both teams in the NBA bubble in Florida in August.

Mavericks: First of two at Utah on Wednesday. The Mavericks beat the Jazz twice before the coronavirus shutdown last season before Utah won in the bubble.