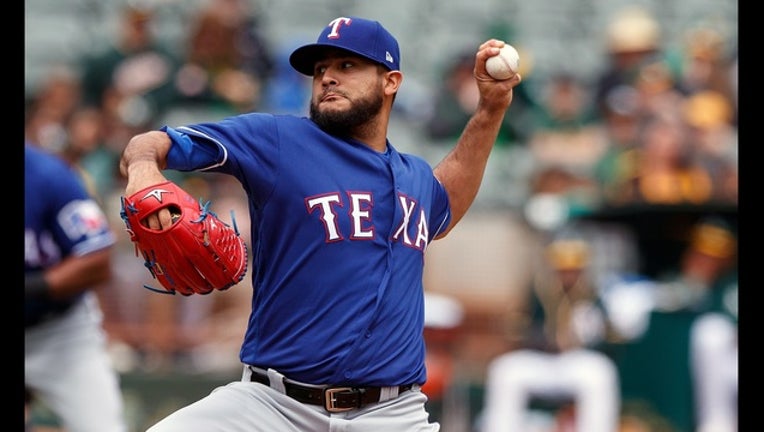 Martin Perez of the Texas Rangers pitches against the Oakland Athletics during the first inning at the Oakland Coliseum on April 5, 2018 in Oakland, California. (Photo by Jason O. Watson/Getty Images)

OAKLAND, Calif. (AP) - Texas left-hander Martin Perez had to get a little crafty to keep things from getting out of hand in his first start of the year.

It was a lot easier than dodging a bull - something Perez wasn't so successful doing in the offseason, which led to the 27-year-old getting a late jump in spring training.

Perez allowed 10 hits but pitched into the sixth inning and Texas held on to beat the Oakland Athletics 6-3 before another sparse crowd on Thursday.

"He seemed to be right back where he was at the end of the year confidence-wise, ability to throw strikes," Rangers manager Jeff Banister said.

"He was only behind three hitters. What I loved the most is that he continued to pound the strike zone, use the sinker, the four-seamer and his off-speed stuff and nothing seemed to rattle him."

Perez (1-0) was activated off the disabled list before the game and allowed three runs and 10 hits over 5 1-3 innings.

Perez was set back in spring training after breaking his right (non-pitching) elbow in December in an incident with a bull on his Venezuelan ranch.

The lefty pitched with runners on base every inning on Thursday, but repeatedly induced ground balls to keep the damage to a minimum.

"I didn't have my best stuff but I can finally compete," Perez said. "I had fun out there. It's good to recover from surgery and help your team win. They hit the ball three times hard. I think I did a great job."

Four relievers combined for eight outs and Keone Kela pitched the ninth for his second save.

Beltre doubled off Oakland starter Daniel Mengden (0-2) and scored in the second then singled in the eighth. With 3,055 hits, Beltre is tied with Rickey Henderson for 24th place on the hits list.

"It's obviously humbling," Beltre said. "It's hard to believe that I caught up to those guys. It is because I've been playing for a long time and I've been lucky enough to stay on the field."

The A's put runners on the corners with no outs in the seventh but failed to score. Texas shut down another potential rally in the eighth when right fielder Mazara threw out Piscotty at second base trying to stretch a single into a double.

"We swung the bat better the last two days but today was simply a case of not getting big hits when we needed to," Oakland manager Bob Melvin said. "We're going to have to do better than that."

Mengden allowed four runs and five hits in 5 1-3 innings and took a line drive off his plant foot in the second inning. The right-hander, winless in 13 starts at the Coliseum, dropped to the turf and was in pain for several moments but recovered to stay in the game.

Rangers: RHP Tony Barnette (lower back strain) begins a rehab assignment with Double-A Frisco. Barnette is expected to make two to three appearances before the team decides on where he goes next. ... RHP Jose Leclerc was optioned to Triple-A Round Rock to make room for Perez on the 25-man roster.

Athletics: RHP Paul Blackburn (forearm tightness) was transferred to the 60-day disabled list to make room for Trayce Thompson, who was claimed off waivers from the Yankees and is expected to join the team in Los Angeles. Thompson's brother Klay is an All-Star with the Golden State Warriors, who play next door to the Coliseum.

A's catcher Jonathan Lucroy threw out five runners in the series, including two on Thursday. Since 2010, Lucroy has thrown out 182 runners, tops in the majors.

Rangers: LHP Matt Moore (0-1, 9.00) pitches the opener of a three-game home series against Toronto on Friday.