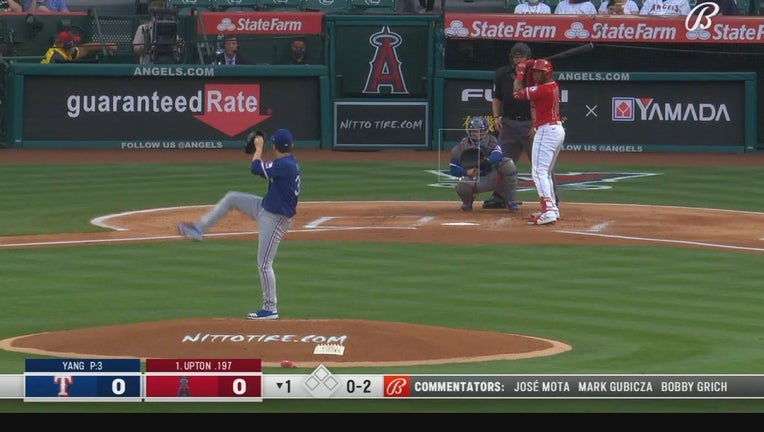 Ohtani scorched a cutter by Brett de Geus down the right-field line for a three-run shot to give the Angels a 9-1 lead in the fourth inning.

The ball had a 117 mph exit velocity off Ohtani's bat — the hardest-hit homer by an Angels player since MLB Statcast started in 2015.

"I would assume for us mortals it is merely impossible. But Shohei plays by his own rules," said Jared Walsh, who also homered for the Angels. "Nothing he does surprises me at this point. Every day it is something new."

Ohtani is one behind Toronto's Vladimir Guerrero Jr. for the major league lead in home runs.

"It was hit hard enough that it didn’t have time to hook. It had a nice little baby draw to stay fair," Angels manager Joe Maddon said. "Every swing he takes right now he looks like he can hit it over 100 miles per hour. He is focused and it is not surprising us from the bench."

Justin Upton gave the Angels their seventh game this season when they homered at least three times. Upton had his first career leadoff homer and Walsh added a two-run shot in the second inning that narrowly cleared the short wall in right.

"I think Upton set the tone hitting it hard into the bullpen on the first at-bat, and we continued to have quality at bats from there," said Walsh, who is fourth in the AL with a .321 batting average and has gone deep three times in his last four games.

Texas rookie Adolis García — who also has 15 home runs — continued his hot May with a two-run drive in the sixth. He's hit 10 homers this month, including four in four games.

Heaney (2-3) went 5 2/3 innings and allowed three runs on four hits. The right-hander — who got his first victory since April 9 against Toronto — did not allow a hit until the fourth inning. He had four walks, including one to Nick Solak in the fourth that led to Texas' first run, and five strikeouts.

"Anytime you get spotted those runs it makes it easier. I was good early but not as good later on," Heaney said.

Texas starter Hyeon-jong Yang (0-2) had allowed two or fewer runs in his first two major league starts, but struggled in his first matchup against a team that had previously seen him.

The 33-year old Korean left-hander, who gave up two runs in 4 1/3 innings of relief in his big league debut on April 26 against the Angels, retired the side in order just once in his 3 1/3 innings. He was tagged for seven runs on five hits with three walks.

"His command was a little off. None of this pitchers were effective and he got in trouble right away," Rangers manager Chris Woodward said. "Once they jumped ahead by quite a bit we couldn’t fight our way back."

Both right fielders made diving catches to prevent hits. Los Angeles' Taylor Ward snagged a sinking liner by David Dahl during the second inning. Dahl then returned the favor in the fifth inning when he made a sliding grab on a ball hit by Ward.

Garcia's 10 homers in May are tied for the most by a rookie in a calendar month in Rangers history (Dave Hostetler also had 10 in June 1982). His 15 to this point are second by a Texas rookie before the All-Star break, trailing only Pete Incaviglia's 16 in 1986.

Rangers: Dahl left the game with rib cage soreness after running into the wall in foul ground during the seventh inning. ... Kolby Allard could start Thursday's game at Seattle after

Angels: Jose Iglesias left during the fifth inning with a left hamstring cramp after hitting a double. ... RHP Chris Rodriguez (right shoulder inflammation) threw a bullpen session before Tuesday's game and could be activated during this weekend's series at Oakland. ... C Max Stassi (concussion) is expected to go on a rehab assignment, but could return to the lineup next week.