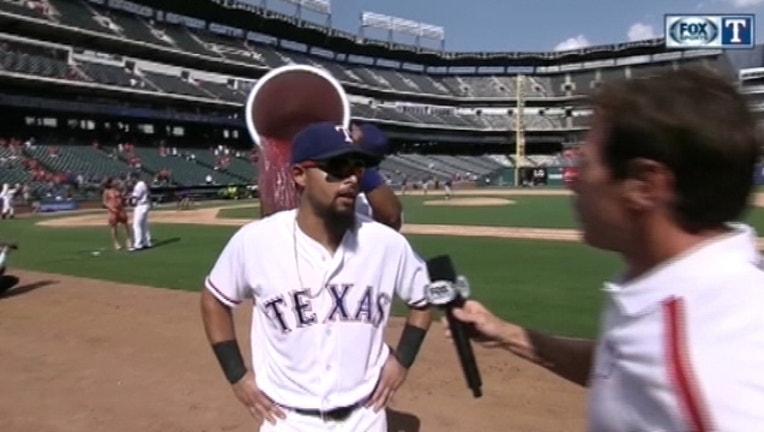 ARLINGTON, Texas (AP) — Rougned Odor homered twice a day after hitting a game-ending shot and Carlos Gomez connected for a grand slam off Felix Hernandez, sending the Texas Rangers to a 14-1 romp over the Seattle Mariners on Wednesday for a three-game sweep.

Odor tied a career high with five RBIs and Adrian Beltre and Ryan Rua also homered for the AL West leaders. Texas (80-54) moved a season-high 26 games over .500 with a fifth straight win and gave Seattle its fifth loss in a row.

Odor had a two-run shot for a 10-0 lead in the seventh and a three-run homer in the eighth, and leads the team with 27 home runs. On Tuesday night, his two-run homer in the bottom of the ninth gave Texas an 8-7 win.

Hernandez (9-5) matched a season high by allowing six runs in his shortest outing, coming out after four innings in his first loss since May 27.

Gomez hit a soaring fly ball about a dozen rows above the 14-foot wall in left field for his second grand slam this season and a 6-0 lead in the fourth. The other slam also was against Seattle on July 17 when he was still with Houston.

Gomez has three hits in two games since ending a 0-for-18 skid following a homer in his first at-bat for Texas after his release by the Astros. He has seven homers this season.

Beltre's 25th homer of the season was a two-run shot in the fifth.

Mariners: DH Nelson Cruz missed his second straight game with a nerve issue in his left hand that affects his grip on the bat. Manager Scott Servais said he was responding to medication and should be in the lineup Friday against the Los Angeles Angels. The Mariners are off Thursday. ... Servais said he expects LHP James Paxton to make his next start after he ripped a fingernail Tuesday.