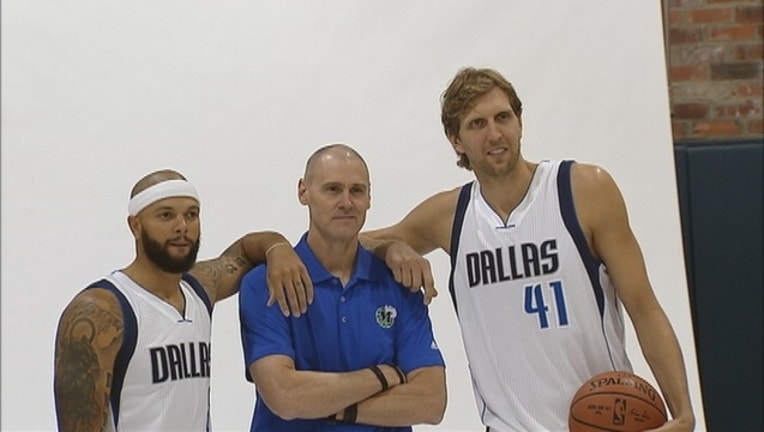 DALLAS (AP) — Dirk Nowitzki won't let his 18th NBA season be clouded by DeAndre Jordan's decision to renege on Dallas and stay with the Los Angeles Clippers in free agency.

Competitive or not without Jordan in the tough Western Conference, the Mavericks are moving on with yet another transformation of their roster. They would have had a makeover either way.

"It's a player we didn't get," Nowitzki said at the team's media day Monday. "Every summer there's a player that was close or had us on their radar. You go for players and don't get them. It doesn't work out."

The 37-year-old Nowitzki, coach Rick Carlisle and chief recruiter Chandler Parsons offered the obligatory "disappointing" to the inevitable questions about the summer drama that played out on Twitter.

The same could be said for free agent shooting guard Wesley Matthews, although he's not getting paid that way after his deal jumped to the maximum at four years and $70 million because of the money freed up by Jordan's reversal.

Matthews turned down owner Mark Cuban's offer to sign elsewhere when the Mavericks got the bad news on Jordan.

"I came to Dallas because Dallas believed in me," said Matthews, who won't be ready for the start of the season after rupturing an Achilles tendon last March with Portland in a game against the Mavericks.

"They weren't worried about this injury. Dallas sows faith in not only their staff, but in me to overcome this. I don't really have words for that."

Parsons might also miss the start of the season after surgery for a right knee injury that sidelined him for all but one game in the Mavericks' five-game loss to Houston in the first round of the playoffs.

Dallas will have a new starting center for the sixth straight season after the second departure of Tyson Chandler. He helped Dallas win the title in 2011, left for the New York Knicks when Cuban wouldn't give him a long-term contract, came back in a trade last summer and bolted for Phoenix while the Mavericks were still pursuing Jordan.

Zaza Pachulia came in a trade with Milwaukee, and Samuel Dalembert is returning after spending 2013-14 with the Mavericks. Oft-injured JaVale McGee could be another option.

It could be weeks into the season before the projected starters are on the court together, but Parsons, Williams and Matthews will be in charge of filling the scoring void left by the free agent departure of Monta Ellis, who went to Indiana. Williams is battling a mild calf strain.

"We've got to move toward solving our health situation," Carlisle said. "That's going to be a real key for us to be as good as we can be."

Assuming the Mavericks do that, then it's back in Carlisle's hands to mesh another overhauled roster, although this time he's working with several more long-term contracts while going into the final year of his deal.

"I like the challenge of taking a bunch of new guys and melding them together," said Carlisle, who needs two victories to pass Don Nelson atop the team's career list. "I'm always going to look for a positive on things like that."

And he has to move the franchise past a big negative — the jilting from Jordan.

"I really like what this staff and what this organization has done to bounce back from the whole fiasco," Parsons said. "But like I said, that's in the past and we're moving forward."