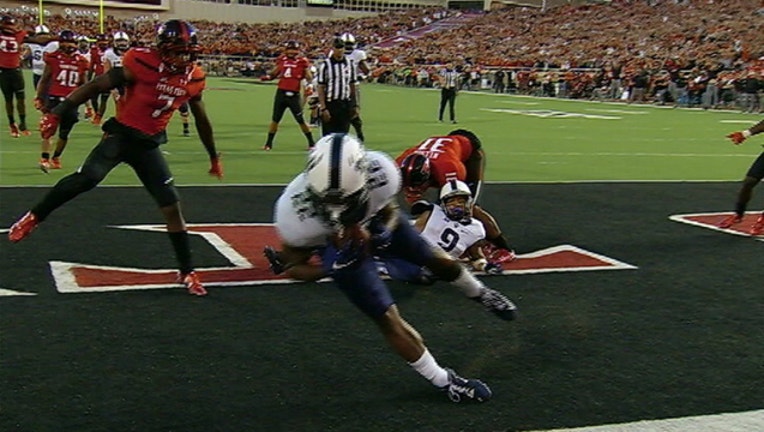 LUBBOCK, Texas (AP) — Aaron Green caught a tipped pass in the back of the end zone with 23 seconds left and No. 3 TCU outlasted Texas Tech 55-52 on Saturday in the Big 12 opener for both teams.

On fourth-and-goal from the 4, Trevone Boykin's pass was high to Josh Doctson, but he got a hand on it and Green grabbed the ball as he fell out of the end zone. A video review confirmed Green had control of the ball and got a foot in bounds.

Doctson caught three touchdown passes and had 267 yards on 18 catches — all career highs.

Green rushed for one touchdown, and the Horned Frogs got a safety in the first quarter after the snap went over Texas Tech quarterback Patrick Mahomes.

Mahomes, who was injured in the first quarter, completed 25 of 45 passes for 392 yards. He threw two touchdown passes and ran for another score for the Red Raiders (3-1, 0-1).

The teams traded empty possession before the Horned Frogs started at their own 47 and drove downfield for the winning touchdown.

The Red Raiders didn't give up after TCU scored. On the final play of the game — after time expired and a defensive penalty on TCU — Mahomes found DeAndre Washington for a 24-yard gain. He pitched it to a lineman, who pitched it to a receiver who got the ball to Jakeem Grant. He was pushed out of bounds at the TCU 10 to end the game.

Washington ran for four touchdowns and a career-high 188 yards.

Doctson's 18 catches marked the first time a TCU receiver got at least 10 receptions in a game since Boykin got 10 as a receiver against West Virginia in 2013.

Mahomes hurt his left knee early in the first quarter when he dove toward the end zone as he finished a 15-yard run. He got up limping but stayed in for the next play to hand the ball to Washington who scored on a 1-yard run. Mahomes played the rest of the game with a knee brace but managed to limp around the left side for a 4-yard score late in the second quarter.

Horned Frogs had a chance to extend their 33-28 lead on the opening drive of the third quarter but Jaden Oberkrom, the active Football Bowl Subdivsion leader with 62 career field goals, missed one right from 25 yards.