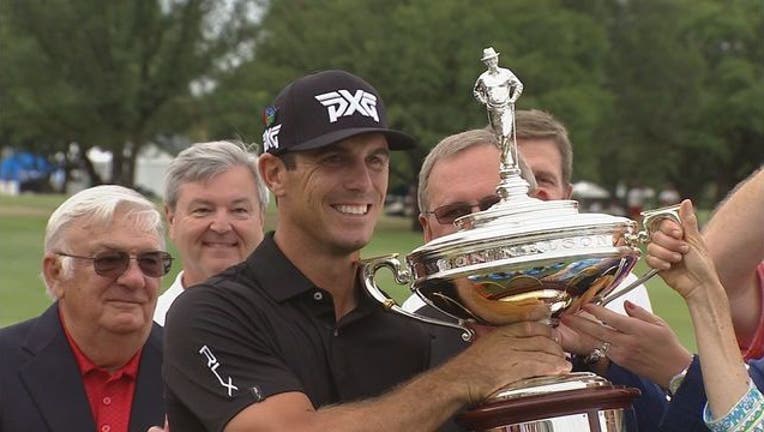 IRVING, Texas (AP) - Billy Horschel had missed four straight cuts when he arrived at TPC Four Seasons, a course he was never particularly fond of.

After winning the last AT&T Byron Nelson scheduled at the Irving resort, Horschel now wishes he could have the chance to come back.

While his 18-foot birdie putt on the first playoff hole Sunday stopped just short, Horschel won with a par when Jason Day pulled his 4-foot par putt left and past the hole.

"When I hit it I knew it was on a perfect line and I thought I got it to the hole. ... I just wanted to finish it off there," Horschel said. "I didn't expect him to miss it. I was expecting to go back to the tee and play the hole again."

Instead, the playoff wrapped up the Nelson's 35th and final tournament in Irving. The event shifts next year to the new links-style Trinity Forest Golf Club south of downtown Dallas.

"It's sad that it's leaving because I was never a fan of this course, but came here and now I am," Horschel said. "I won, and I don't want to leave."

Third-round leader James Hahn finished a stroke back after shooting 71. He just missed a miraculous eagle at the 18th hole that would have gotten him in the playoff with his playing partners - threesomes were used after early morning rain delayed the start Sunday.

Day, who got the first of his 10 PGA Tour victories at the 2010 Nelson, had the lead alone only once, when he pitched in from 78 feet from the rough by the greenside bunker at the 477-yard 15th. He was there after two horrible shots, a tee shot way right and the approach that set up an awkward stance.

But at the par-5 573-yard 16th, the easiest hole at TPC Four Seasons, Day's wayward tee shot hit a spectator. After making sure the woman was OK, he hit an approach that settled pin-high on the green, but a 9-foot birdie chance curled by the hole.

"I only had one top 10 up to this point. To be able to play the way I did today, I played some good solid golf," Day said. "It's a little disappointing, but it's not the first tournament I'm going to lose. ... I feel good about my game."

Horschel also got to the 16th green in two, and two-putted from 44 feet for a tying birdie. He and Day parred the last two holes, though Horschel had a longer but similar putt at No. 18 in regulation that also come up just short.

Earlier this season, Horschel was eliminated from a five-man playoff at the RSM Classic when he narrowly missed a birdie putt on the first extra hole, then shockingly missed a 2-foot putt.

Horschel's fourth PGA Tour victory, which earned him $1.35 million, was his first since taking the 2014 Tour Championship for the FedEx Cup title.

Hahn almost got to 12 under when his approach from 122 yards at the 18th hit on the green, spun back and skimmed over the edge of the cup. He made the 4-foot birdie putt to finish alone in third, one stroke ahead of Jason Kokrak.

Kokrak went into the weekend with a five-stroke lead, the largest ever after 36 holes at the Nelson, before weekend rounds of 72 and 70.

Defending champion Sergio Garcia had birdies on six of his last eight holes Saturday to get within four strokes of the lead. But he was as quickly out of contention after giving back four strokes while missing three putts of 5 feet or less at Nos. 2-4. His closing 74 put him 4 under and tied for 20th.