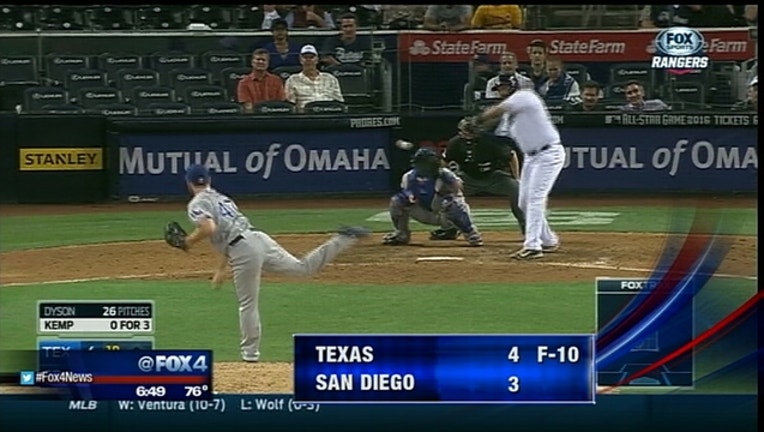 SAN DIEGO (AP) — After being held out of the starting lineup for the entire series to rest, it was time for Mitch Moreland to step up.

Moreland, who struck out as a pinch hitter earlier in the game, delivered when he doubled in the go-ahead run in the 10th inning to help the surging Texas Rangers to a 4-3 victory over the San Diego Padres on Wednesday night.

Moreland's line drive down the right-field line off Bud Norris (1-1) scored Elvis Andrus, who had reached on a one-out single.

"I was happy to go up there my last at-bat," Moreland said. "I feel like I slowed it down a little bit and I got a good pitch."

The Rangers cut first-place Houston's lead in the AL West to two games. The Astros lost 8-3 to Seattle.

Texas, which has won nine of 12 games, retained its one-game lead over Minnesota for the second AL wild-card berth.

After the Rangers tied the score at 3-all in the eighth on Adrian Beltre's sacrifice fly, Moreland entered the game as a pinch hitter with two outs and runners at second and third. But Joaquin Benoit struck him out.

Texas also threatened in the ninth off Padres closer Craig Kimbrel, but he escaped a one-out, bases-loaded jam by striking out pinch-hitter Mike Napoli and Adrian Beltre.

"It was a hard-fought game and it was a good win for us," Moreland said.

If the Rangers had not pulled out the three-game series by winning the final two, it would have been a tough start to a 10-game road trip, their longest of the season.

"It's been a good stretch and we've got a ways to go," Texas manager Jeff Banister said. "We've got to continue to play well and be on top of our game."

Beltre's sacrifice fly in the eighth spoiled a solid outing by Padres starter Ian Kennedy, who tied his career high with 12 strikeouts, including the final five batters he faced.

"It goes back to fastball command," Kennedy said.

"It goes unnoticed how great he was," Padres interim manager Pat Murphy said. "Great performance, battling their No. 1."

Clint Barmes drove in three runs for San Diego, including a two-run double in the fourth inning off Cole Hamels. Barmes put the Padres ahead 3-2 in the sixth with a run-scoring groundout.

The Padres have lost seven of 10 games.

Hamels, who is 9-2 with a 2.25 ERA against the Padres in 17 career starts, gave up three runs and eight hits over seven innings.

Beltre had an RBI double in the first and Chris Gimenez hit a solo homer for the Rangers.

Hamels made his 300th career start and has 1,895 strikeouts, third-highest among active pitchers behind Felix Hernandez (2,032) and Justin Verlander (1,898).

Padres: 1B Yonder Alonso (sprained lower back) and C Derek Norris (sore left arm) were out of the starting lineup. Alonso aggravated his existing back condition Tuesday night, while Norris' situation was the result of a collision with Beltre at the plate on Tuesday. ... RHP Shawn Kelley (right forearm strain), who left Tuesday's game, is expected to be out for 2 to 3 days.

Padres: RHP Colin Rea (2-2, 5.95 ERA) makes his fifth career start in the opener of a four-game series against the visiting Los Angeles Dodgers on Thursday. After winning his first two starts, the rookie has been pounded in his last two starts, giving up eight earned runs in nine innings.