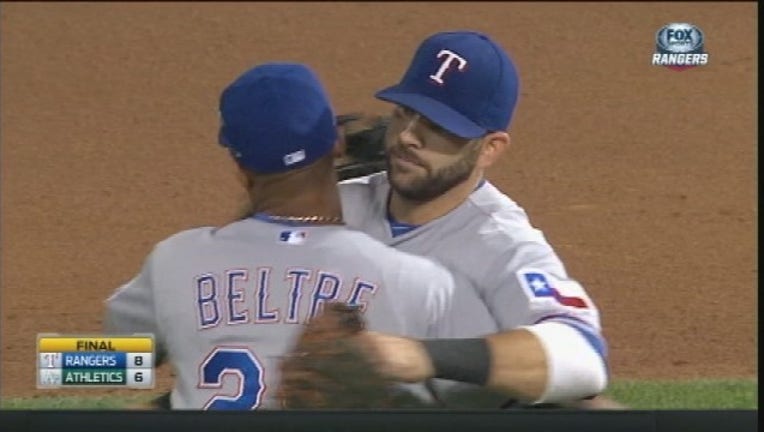 OAKLAND, Calif. (AP) — Since way back in spring training, the Texas Rangers have committed themselves to being a complete ballclub.

That approach is paying off in September, and they know there's still a tough stretch ahead to reach the playoffs.

Delino DeShields hit a go-ahead sacrifice fly in the sixth inning four batters after Mitch Moreland connected for a tying two-run homer, and the Rangers beat the Oakland Athletics 8-6 on Tuesday night to increase their lead in the AL West.

Chi Chi Gonzalez (4-5) pitched two scoreless innings for the win in relief of starter Martin Perez as the Rangers moved two games ahead of Houston after the Astros lost 4-3 at home to the Angels.

"They all showed up tonight," manager Jeff Banister said.

DeShields hit another sacrifice fly in the eighth, while Shin-Soo Choo and Adrian Beltre hit consecutive sacrifice flies in the fifth to aid the Texas comeback.

Jake Smolinski and Marcus Semien hit back-to-back RBI triples in the second to give the A's 40 on the season, tying the Oakland record set in 1968.

Rougned Odor had an RBI single and Moreland matched his career high with his 23rd home run on a 2-1 pitch from left-hander Sean Nolin in the sixth. Moreland has his second career 20-homer season. He hit 23 in 2013. DeShields put the Rangers ahead against Drew Pomeranz (5-6).

"It was just one of those games we continued to fight and kept rolling the lineup over trying to create some opportunities, and we were able to put some runs on the board," Moreland said.

Texas won for just the second time in four games and snapped a two-game road skid, having lost consecutive away games for the first time since dropping three in a row outside Arlington from Aug. 9-12. The Rangers beat the A's for only the third time in the last nine meetings.

Nolin pitched five innings for Oakland, giving up seven hits and five runs with two strikeouts and two walks. The A's kicked off their final homestand of the season by announcing before the game that Barry Zito would start Saturday against former Oakland teammate Tim Hudson of the defending champion San Francisco Giants. It's a special reunion for the two as Hudson plans to retire and perhaps Zito, too.

Perez allowed five runs — four earned — and six hits in four innings, struck out three and walked three. Shawn Tolleson, the Rangers' sixth pitcher, finished for his 33rd save in his first appearance in six games since Sept. 15 but gave up Danny Valencia's two-out RBI single.

"It wasn't the best played game in the world, but again we end up coming into the ninth inning where we have a chance," A's manager Bob Melvin said. "At times we had good at-bats, at times we didn't. At times we made some good defensive plays, other times we didn't. So it was not a real consistent game."

"That's been our MO all year, we've been very aggressive on the bases," Moreland said. "We had a lot of guys step up and have sacrifices in this game tonight."

Rangers: OF Josh Hamilton, recovering from arthroscopic surgery on his left knee Sept. 11, will try to run the bases Wednesday. Banister doesn't want to predict a timeline for the slugger's return. It's more about evaluating how Hamilton feels each day and how much he can tolerate physically. "It's progressing," Banister said. "Each step he does make in the positive direction benefits us and him." ... LHP Cole Hamels will pitch Thursday's series finale.

Athletics: C Josh Phegley is out for the season with a concussion after a fluke injury Friday at Houston. Teammate Billy Butler was twirling his bat pregame and inadvertently hit Phegley in the back of the head. ... C Stephen Vogt (groin) could catch during this weekend's series against the Giants. ... RHP Chris Bassitt (1-6) will pitch Thursday in his first outing since Aug. 26 because of shoulder trouble. ... Pomeranz took a grounder off his foot.