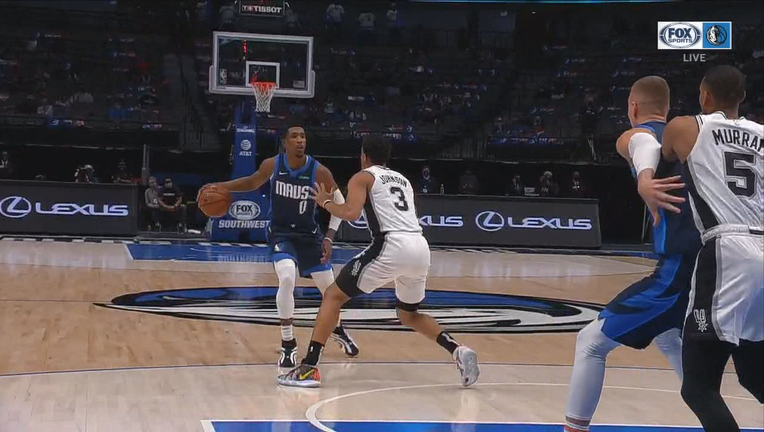 DALLAS - Luka Doncic had 22 points, 12 rebounds and 12 assists in his 33rd triple-double, Kristaps Porzingis had 28 points and 14 rebounds and the Dallas Mavericks used a late run to pull away and beat the San Antonio Spurs 115-104 on Wednesday night.

Dallas finished with a 17-4 run against a Spurs team that will no longer have seven-time All-Star LaMarcus Aldridge in the lineup.

Before the game, coach Gregg Popovich announced that Aldridge, 35, in his sixth season in San Antonio, would no longer be with the team by mutual agreement.

"He’s been a great teammate," said Popovich, who added that Aldridge is healthy. "We just think this is a win-win for both LaMarcus and for the club."

"He might the longest teammate that I’ve had," Mills said. "He’s obviously well respected by this group particularly and every team that he’s played for. As a teammate, you just wish the best for him."

DeMar DeRozan had 30 points, 11 assists and four steals for the Spurs. Mills added 14 points and Rudy Gay had 13 for San Antonio, which was outrebounded 51-30 and outscored 21-2 on second-chance points.

"We lost the game on the boards," Popovich said. "Porzingis was great on the boards. I thought we did a good job on Doncic. Played hard, played well, but too many mental mistakes and a little bit uneven flow and uneven performance offensively."

During the Mavericks’ late spurt, the Spurs missed 11 straight shots over a period of almost eight minutes.

Porzingis, who had offseason knee surgery, has double-doubles in three straight and seven of his last 12 games.

"I feel like I’m getting there," Porzingis said. "I still have to keep working on it. After surgery, the leg, it’s not feeling the same."

"He was great on defense. He passed the ball. He cut. He moved. He did virtually everything," Carlisle said.

Doncic is tied with Bob Cousy for 11th place in career triple-doubles.

The Mavericks’ late spurt began midway through the fourth quarter when the Spurs’ Derrick White fouled Josh Richardson with 1.2 seconds left on the shot clock.

The Spurs led 59-52 at intermission, which matched their largest lead of the half, led by DeRozan’s 14 points, eight assists and three steals.

Spurs: Aldridge was a three-time All-Star while with the Spurs. He played in 21 of San Antonio’s 32 games this season, averaging 13.7 points and 4.5 rebounds in 25.9 minutes – a career low in rebounds and his fewest points and minutes since he was a rookie.

Mavericks: Dallas changed its attendance policy coming out of the All-Star break and admitted about 3,500, an increase of about 1,000. Everyone inside American Airlines Center is still required to wear a mask in accordance with NBA rules.

Spurs: Host Orlando on Friday night – with fans at AT&T Center for the first time this season – before a five-game road trip.

Mavericks: Finish a back-to-back on Thursday night at Oklahoma City. They held the Thunder to a season-low 78 points in a nine-point win in Dallas in their last game before the All-Star break.