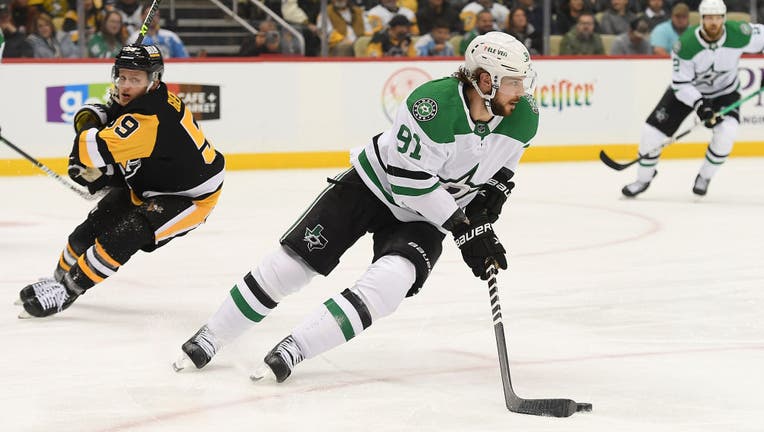 PITTSBURGH, PA - DECEMBER 12: Tyler Seguin #91 of the Dallas Stars skates with the puck in the third period during the game against the Pittsburgh Penguins at PPG PAINTS Arena on December 12, 2022 in Pittsburgh, Pennsylvania. (Photo by Justin Berl/Ge

PITTSBURGH - The playoffs are still months away for Pittsburgh and Dallas. Yet they provided a glimpse of what likely awaits each of them in the spring, a time of year when space gets tight and open ice essentially vanishes.

For two of the NHL's highest-scoring teams, playing responsibly on the defensive end in December can be a challenge. But the Penguins played with grit and goaltending in a 2-1 victory over the Stars on Monday night that pushed their win streak to six.

Evgeni Malkin's flip into an essentially open net with 34 seconds remaining provided the difference. The Russian star pounced on a loose puck just in front of the Dallas crease

"I know I have couple chances (earlier in the game)," Malkin said. "I almost have breakaway. I know it’s coming. (I just had to be patient) and use my chance."

Yet what caught Pittsburgh coach Mike Sullivan's eye about Malkin wasn't the goal but a backcheck Malkin made earlier in the period, which showed a solid defensive effort by a team that can sometimes turn games into a track meet where chances are traded freely.

Facing the equally high-powered Stars, Pittsburgh stayed patient while improving to 13-2-2 over its last 17 games.

"It, without a doubt, had a playoff feel in the sense that you had to fight for every inch," Sullivan said.

Malkin's ninth goal of the year came after Bryan Rust's shot attempt from in close was poke-checked away. When Rust's momentum carried him into Oettinger, Malkin had all the space he needed to make sure the game didn't go to overtime.

"I thought we played a great road game," Oettinger said. "We gave ourselves every chance to win — just a bad bounce at the end. So I think we have to be proud of how we played. We feel like we deserved a point or two. That stings, but we have to flush it quick."

Pierre-Olivier Joseph scored his first goal of the season for Pittsburgh. Tristan Jarry stopped 26 shots to improve to 9-0-2 in his last 11 starts.

Roope Hintz collected his 12th goal of the season for Dallas. Oettinger made 23 saves but had no chance on Malkin's winner after Rust essentially spun Oettinger around after the two collided at the top of the crease. The goal was reviewed for goaltender interference but ultimately stood.

A showdown between rising Dallas star Jason Robertson — who came in as the NHL's second-leading goal scorer behind Edmonton's Connor McDavid — and Penguins captain Sidney Crosby offered the promise of a shootout.

Robertson was held without a shot for the second time this season, and Crosby mustered only two in 19 minutes of ice time. Two of the league's highest-scoring teams played the type of game that's the norm the late spring, not a couple of weeks before Christmas.

Hintz needed just 19 seconds to give the Stars the lead, swooping behind the Pittsburgh net to the right circle and finding himself in the right spot when a long shot from the point by Nils Lundkvist deflected off Pittsburgh defenseman Kris Letang right to Hintz's stick.

Jarry quickly settled down and Joseph evened the score with a pretty wrist shot the left circle that found its way around a perfect screen by teammate Jason Zucker and into the net 13:14 into the first for Joseph's second career goal and first since Feb. 6, 2021.

Penguins: Travel to Florida to face the Panthers on Thursday.