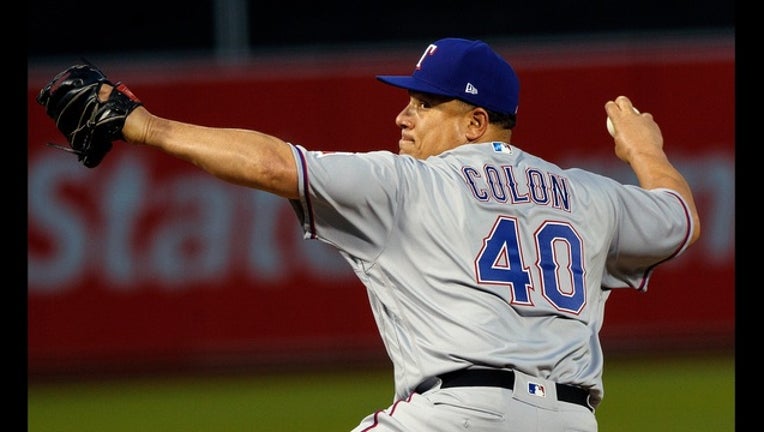 Bartolo Colon #40 of the Texas Rangers pitches against the Oakland Athletics during the first inning at the Oakland Coliseum on April 2, 2018 in Oakland, California. (Photo by Jason O. Watson/Getty Images)

Matt Chapman homered for the second time in two days, and Matt Olson and Jonathan Lucroy had two hits apiece for Oakland. The A's had lost three straight since beating the Angels on opening day.

Joey Gallo singled in a run for Texas. The Rangers have dropped six consecutive road openers and nine consecutive games at the Coliseum.

Called up from the minors before the game, Colon allowed seven hits in six innings. The A's only run off the portly right-hander came on Chapman's homer leading off the third.

At 44 years, 313 days old, Colon became the oldest player in the majors this season, slipping past Seattle's Ichiro Suzuki, who is four months younger. Last season Suzuki said he wanted to play until he's 50.

Colon might not stick around that long, but he pitched well enough in his first start of the season.

Chris Hatcher (2-0) retired two batters for the win. Blake Treinen pitched 1 2/3 innings for his first save despite allowing the first two batters to reach in the ninth.

The A's went ahead to stay in the seventh. Lucroy hit a one-out double off Kevin Jepsen (0-1). Marcus Semien, who struck out twice against Colon, walked with two down and Lowrie greeted Jake Diekman with a towering double off the wall in right field.

Rangers: OF Delino DeShields underwent surgery on his left hand. The timetable for his return remains four to six weeks. ... RHP Tim Lincecum, on the disabled list since March 29 due to blisters on his right middle finger, threw a bullpen before the game.