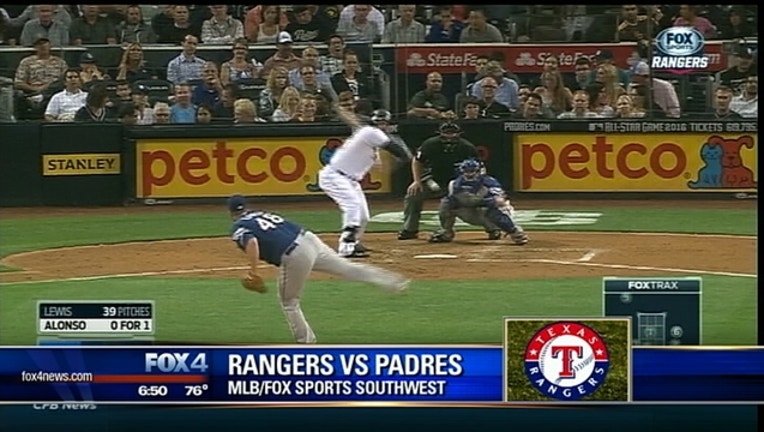 SAN DIEGO (AP) — The way the Texas Rangers have been scoring, Colby Lewis figured allowing two runs in the third inning wasn't going to be that bad.

It turns out the four runs he allowed in the sixth were what really hurt.

While Lewis struggled, Tyson Ross held Texas to three hits in seven innings and hit an RBI single, and the San Diego Padres won 7-0 on Monday night, handing the Rangers just their third loss in 10 games.

The Rangers dropped four games behind first-place Houston in the AL West and remained in the second AL wild-card spot.

"Give us two runs with our offense I wasn't worried about it. I just told myself I had to go out there and put up zeros," Lewis said. "There are no excuses. I just didn't make the pitches when I needed to make the pitches."

"I felt he had been throwing the ball well," manager Jeff Banister said. "He's been a guy who has been so good for us in similar situations, being able to work his way out of those type of situations."

The dominating performance by Ross (10-9) allowed him to reach double digits in victories for the second straight season. He struck out seven and walked two in his second victory over Texas this season, the other one coming on July 12. It was his fourth win in five decisions.

"You've got to get him early or he makes it tough on you and he seemed to have his good stuff tonight," Banister said.

With two runs already in during the sixth, the Rangers intentionally walked rookie catcher Austin Hedges to get to Ross, who was batting eighth. Ross hit a sharp single to center to bring in Cory Spangenberg, aboard on an RBI double, and chase Lewis. Jedd Gyorko hit a sacrifice fly and Yangervis Solarte added an RBI single that inning.

The Padres scored two runs with two outs in the third. Rookie Travis Jankowski, batting ninth, beat out an infield single to shortstop and stole second. Yonder Alonso hit an RBI single to center and Matt Kemp followed with an RBI double to left-center.

Texas outfielder Will Venable, acquired in a trade with San Diego on Aug. 18, got a nice ovation as he took the field in the bottom of the first and again when he came to bat in the second. Ross tipped his cap to Venable, and then struck him out to end the inning.

Rangers: 2B Rougned Odor returned to the lineup after injuring his finger last Tuesday. ... OF Josh Hamilton will be activated from DL on Tuesday, but he's not expected to play in the field right away.

Padres: OF-INF Wil Myers (wrist) will be sent out on a rehabilitation stint Tuesday to Single-A Lake Elsinore. ... RHP Josh Johnson (elbow) is scheduled to throw a simulated game on Tuesday.