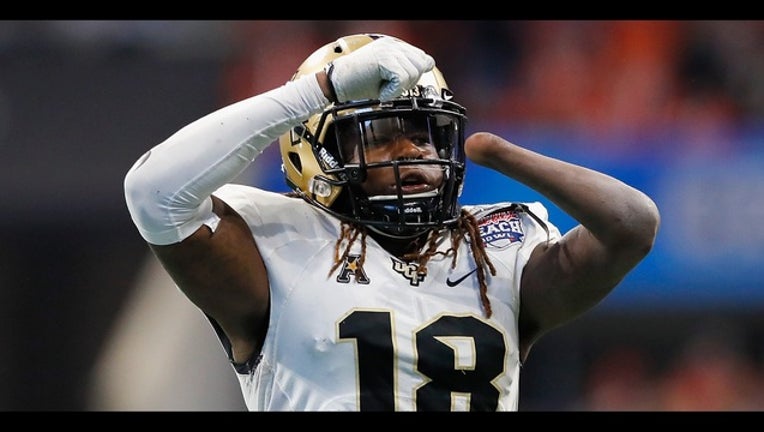 Shaquem Griffin #18 of the UCF Knights celebrates after getting a sack in the third quarter during the Chick-fil-A Peach Bowl at Mercedes-Benz Stadium on January 1, 2018 in Atlanta, Georgia. (Photo by Kevin C. Cox/Getty Images)

RENTON, Wash. (AP) - The Seattle Seahawks have selected Central Florida linebacker Shaquem Griffin in the fifth round of the NFL draft on Saturday.

Griffin lost his left hand to amputation when he was younger, and became the feel-good story of the NFL draft. A groundswell of support got him an invite to the scouting combine in Indianapolis, where he stunned onlookers by bench-pressing 225 pounds a staggering 20 times with a prosthetic left hand and then covered the 40-yard dash in 4.38 seconds.

He was a star at Central Florida despite playing with just one hand. He was the American Athletic Conference defensive player of the year in 2016 and the MVP of UCF's Peach Bowl victory against Auburn last season when UCF went 13-0.

Griffin will be reunited with his brother Shaquill, who was a third-round pick of the Seahawks in 2017 and became a starter in his rookie season. The brothers played together throughout their youth and at Central Florida before Shaquill entered the NFL.