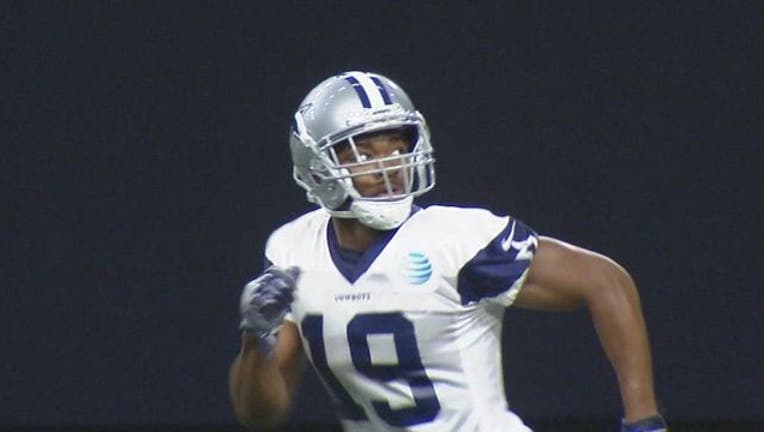 ARLINGTON, Texas (AP) - Amari Cooper's 90-yard touchdown catch was soon followed by DeMarcus Lawrence's first career interception in a Dallas win over Washington that pulled the Cowboys even with the Redskins atop the NFC East.

Call Jerry Jones crazy, but the Cowboys owner and general manager believes those two big plays are connected. And he's suggested as much several times in the month since he traded his next first-round pick in the draft to Oakland for a new No. 1 receiver.

"It's got this entire bunch involved," Jones said of Cooper's impact during a three-game winning streak that put the Cowboys back in contention. "It had to do something, especially defensively. My whole point is there's no question he's added a spark."

The Cowboys (6-5) are showing confidence and swagger reminiscent of two years ago, when quarterback Dak Prescott and running back Ezekiel Elliott were rookie sensations leading a franchise-record 11-game winning streak. They'll need it when New Orleans visits with a 10-win run Thursday.

The Saints (10-1) will be trying to match exactly what Dallas did when Prescott was the 2016 NFL Offensive Rookie of the Year and Elliott the league rushing champion: win 11 in a row after losing the opener. The Cowboys finished with an NFC-best 13 wins two years ago.

"They say if you want to be a good team, you have to really start rolling in November," said Cooper, who had a Dallas Thanksgiving record with 180 yards receiving with a 40-yard touchdown as well in a 31-23 win over the Redskins . "We've been standing tall with our backs against the wall. Hopefully we can keep this up."

There's another connection to 2016 for the Cowboys. They intercepted Colt McCoy three times in the long-time Washington backup's return to Texas coming off Alex Smith's season-ending leg injury. Dallas' last three-pick game was in the 12th win of that year, 26-20 over Tampa Bay.

Anthony Brown had the first interception by a Cowboys cornerback this year in the first quarter; a deflection and catch by defensive end Lawrence set up Prescott's scrambling 5-yard touchdown run for a 31-13 lead early in the fourth quarter; and safety Xavier Woods had his second of the season to all but seal the outcome.

While the defense helped keep the Cowboys around .500 as the offense struggled through the first half of the season, takeaways were an issue with six through the first seven games. But Dallas has seven during a four-game run of forcing at least one turnover and was plus-3 against the Redskins after being minus-2 in a 20-17 loss in Washington, the last time the Cowboys didn't have a takeaway.

"It's not a designed play to get takeaways," said cornerback Chidobe Awuzie, who dropped a potential interception in the end zone and had the deflection that led to Woods' pick . "It kind of just happens. Things happen like that when you're in position to make plays."

And now the Cowboys are in position for the playoffs, with the daunting task of trying to keep their run going while slowing the roll of Drew Brees and the Saints.

"The way we are going and the way we are progressing, especially over the last three games," Prescott said, "we're taking care of the ball, the defense is getting us many possessions even when we are punting it. So we are all just playing together."

NOTES: Jones said he expected LT Tyron Smith to play against the Saints after the five-time Pro Bowler was active but didn't play against the Redskins. Smith said he sustained a stinger in a win at Atlanta four days earlier. ... Elliott finished with 121 yards rushing and overtook Todd Gurley for the NFL lead with 1,074 yards. Gurley, who is in his open week with the LA Rams, had 1,043 yards.