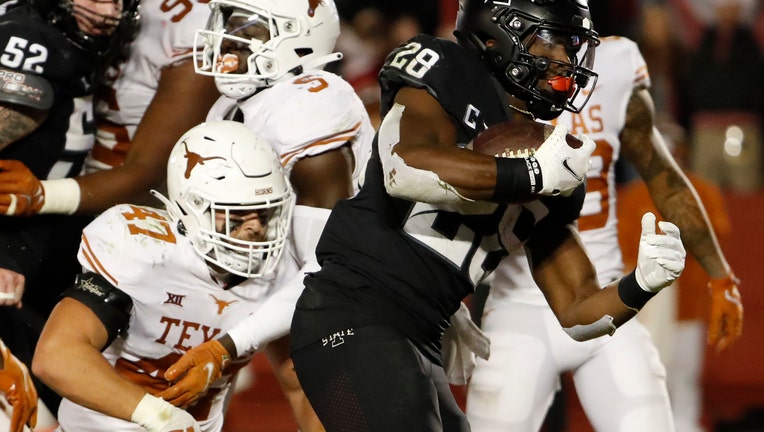 AMES, IA - NOVEMBER 6: Running back Breece Hall #28 of the Iowa State Cyclones scores a touchdown as linebacker Luke Brockermeyer #47 of the Texas Longhorns defends in the second half of play at Jack Trice Stadium on November 6, 2021 in Ames, Iowa. T

AMES, Iowa (AP) - The running of Breece Hall and a little razzle-dazzle propelled Iowa State to a 30-7 victory over Texas at Jack Trice Stadium on Saturday.

Hall rushed for 136 yards and two touchdowns as the Cyclones (6-3, 4-2 Big 12) earned their third straight win over the Longhorn and became bowl eligible for the fifth consecutive season.

It was the sixth time in seven games Hall has gone of the 100-yard mark.

"I may be biased," receiver Xavier Hutchinson said, "but to me Breece is the best back in college football."

The Cyclones trailed 7-3 at halftime, but raced to the lead when Hall darted 47 yards for a touchdown on Iowa State’s first possession of the third quarter.

Hall was held to just 17 rushing yards in the first half.

"I knew before the game it wasn’t going to be easy," Hall said, "so I had to be patient."

Hutchinson made the score 17-7 when he took a lateral from quarterback Brock Purdy and threw a pass to Tarique Milton for the score.

The former high school quarterback said Iowa State only worked on the play a few times in practice.

"All I’m saying is, if they ever need a quarterback, I’m the guy," Hutchinson said with a smile. "I’m just happy he caught it. I’m happy I didn’t mess up the play."

A little more than 3 minutes later, Hall put the Cyclones up 24-7 on a 2-yard touchdown run.

Texas continued to sputter, despite making a switch at quarterback. Casey Thompson started, but completed just 2 of 6 passes for 2 yards.

Hudson Card replaced Thompson late in the first quarter, completing 14 of 23 for 101 yards and a touchdown.

Both offenses came into the game averaging more than 32 points, but defenses ruled early.

The Cyclones were up 3-0 until Texas marched 78 yards in the second quarter. Xavier Worthy capped the drive with a 4-yard reception, giving the Longhorns a 7-3 lead at the half.

Iowa State was held to just 40 rushing yards before halftime, averaging 2.9 per carry. The Cyclones were 1 for 7 on third-down chances in the first 30 minutes.

Hall was the catalyst for Iowa State’s success after the break.

"We all just started playing together really well," linebacker Jake Hummel said. "It’s reassurance. We’re still who we think we are."

Iowa State: As Breece Hall went, so went the Cyclones. Hall averaged 2.4 yards on seven first-half carries, but ran for 53 yards on his first two attempts of the second half. Hall extended his streak of consecutive games with a rushing touchdown to 21, with a 47-yard third-quarter gallop to the end zone.

Texas: Regardless of who played quarterback for the Longhorn, their success depended on the running game. running back Bijan Robinson was Texas’ most consistent performer, accounting for 87 total yards in the first half. He finished with 126 total yards.

Things might start to turn for Texas. None of its final three regular-season opponents is ranked. The only ranked foe remaining on Iowa State’s schedule is at No. 4 Oklahoma on Nov. 20.