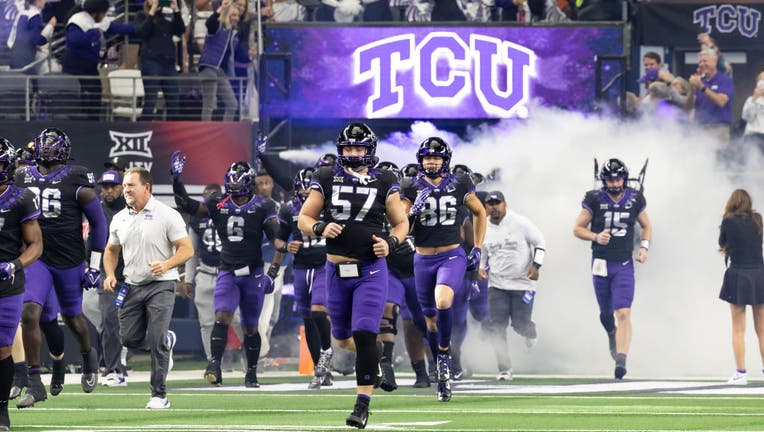 ARLINGTON, TX - DECEMBER 03: TCU Horned Frogs linebacker Johnny Hodges (#57) runs out of the tunnel during the Big 12 Championship game between the Kansas State Wildcats and TCU Horned Frogs on December 03, 2022 at AT&amp;T Stadium in Arlington,

The TCU Horned Frogs are in Arizona preparing for Saturday's Fiesta Bowl playoff semifinal against Michigan.

The Frogs are the first Texas team to make the playoff after a memorable unbeaten regular season and an overtime loss in the Big 12 title game.

Now Heisman runner-up Max Duggan hopes he has two more games left in his college career: Saturday's matchup with the Wolverines and a national title game against the winner of Georgia and Ohio State.

With the media in Arizona it is clear that Duggan does not feel that the moment is too big for TCU.

The third-ranked TCU Horned Frogs will look to upset the No. 2 ranked Michgan Wolverines for a chance to play for the National Championship on Jan. 9.

How to watch: The game will air on TV on ESPN. You can stream the game on the ESPN app.