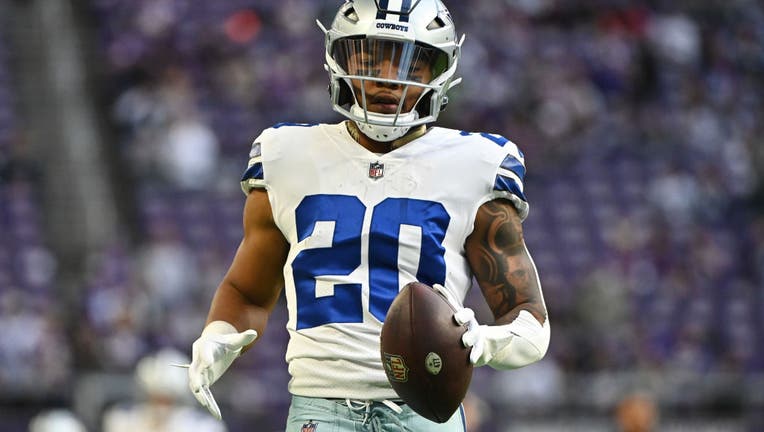 MINNEAPOLIS, MINNESOTA - NOVEMBER 20: Tony Pollard #20 of the Dallas Cowboys warms up prior to playing the Minnesota Vikings at U.S. Bank Stadium on November 20, 2022 in Minneapolis, Minnesota. (Photo by Stephen Maturen/Getty Images)

As we head into the final week of the NFL regular season, the Dallas Cowboys still have a chance to win the NFC East and secure the No. 1 seed in the playoffs, which would give them a bye in the 1st round.

The Cowboys (12-4) have already clinched their spot in the playoffs, but need some help to be division champs or get the top seed in the NFC.

What the Cowboys need to win the NFC East

Dallas must beat the Washington Commanders (7-8-1) and the Philadelphia Eagles (13-3) must lose to the Giants (9-6-1), who have already sealed their spot in the playoffs.

The Cowboys vs. Commanders and Eagles vs. Giants games will both be kicking off at 3:25 p.m. on Sunday, so both sets of fans will be watching both games closely.

RELATED: How to watch Dallas Cowboys vs. Washington Commanders - channel, stream, and more

What the Cowboys need to get No. 1 seed

In order for the Cowboys to get the top seed in the NFC, they will need to beat the Commanders, see the Eagles lose to the Giants, and have the 49ers (12-4) lose to the Cardinals (4-12).

The 49ers vs. Cardinals game will also be kicking of at 3:25 p.m., so we will know where the Cowboys stand in the playoffs by 7 p.m.

If the Cowboys secure the No. 1 seed, they will get a bye in the Wild Card Round.

If the Cowboys win the NFC East, but end up getting the No. 2 seed, they will host the Packers, Seahawks, or Lions.

If the Cowboys end up getting the No. 5 seed, they will travel to Tampa Bay to take on the No. 4 seed Buccaneers, who won the NFC South. These two teams played the opening week of the season in a game that the Bucs won 19-3 and Dak Prescott got injured.